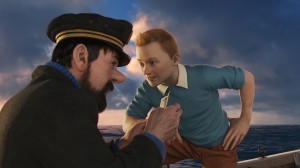 Steven Spielberg and Peter Jackson’s animated motion-capture 3D “The Adventures Of Tintin” (known on its October release in Europe as “The Adventures of Tintin: The Secret of the Unicorn”), from several of Hergé’s graphic novels, may perplex the unacquainted and confound the devout. (It did not go over as a treat in Blighty.) It made me thirstier than a Haddock. I feel winded even reaching toward my notes. While the intention may have been to explore what’s possible in live action, in a new vocabulary of unattractive animation at the kind of headlong pace that would match today what “Raiders of the Lost Ark” accomplished in 1982, the end result is more winded than winding, a dispirited ragbag of faux-naiveté and unlikeable, weird-looking, strange-moving characters. A small curiosity comes from the fact that its dueling antagonists resemble the film’s co-producers: the bibulous Captain Haddock resembles a portly Peter Jackson and virtually every other adult male character bears the beard, intent gaze and gently quizzical smile of Spielberg himself. Tintin, unlike on the page, is quickly a bore and Snowy? Poor Snowy, fulcrum of second-class slapstick. While Tintin’s father Hergé reputedly staked Spielberg as the only filmmaker who ought to bring his creation to the screen, the end result seems nothing less than unnecessary. Drawn & Quarterly just released a more intriguing and appropriately modest curiosity, “The Adventures of Hergé,” by Jose-Louis Bocquet, Jean-Luc Fromental and drawn by Stanislas Barthélémy, a biographical comic in the style of the Belgian writer-illustrator born as Georges Prosper Remi. What’s the difference? Scale. Wit. Charm. Effortless charm. The screenplay is credited to Steven Moffat (“Doctor Who”), Edgar Wright (“Scott Pilgrim vs. the World”) and Joe Cornish (“Attack the Block”). “TAOT”‘s motion-capture performers include Andy Serkis, Jamie Bell, Simon Pegg, Daniel Craig, Toby Jones, Nick Frost and Gad Elmaleh. 107m. (Ray Pride)