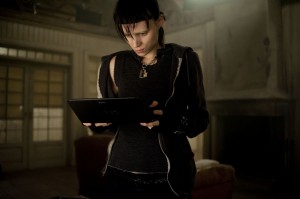 “I want you to help me find a killer of women.”

Rooney Mara attains the role of Lisbeth Salander in “The Girl With The Dragon Tattoo” with the slightest lift of her chin on hearing those words, the coldest fire in her eyes, as she matches the gaze of Daniel Craig’s Mikael Blomkvist.

Stieg Larsson’s “Millennium” trilogy of novels reads, in its present English, like the worst rush translation on Earth, but at its heights, the late author’s moments of pulse-rushing pulp instinct are vital. And its immodest beating heart is Lisbeth. As adapted by screenwriter Steven Zaillian and director David Fincher, “The Girl With The Dragon Tattoo” is terse, telegraphic, fluent, a watercolor composed in molten pewter pen nib.

After a sinister, molten, liquescent, oil-ink-body parts-drowning-birthing title sequence scored to Trent Reznor, Atticus Ross and a yowling, moaning Karen O covering Led Zeppelin’s “Immigrant Song”—James Bond credits after the style of Chris Cunningham—we’re tumbled into a story familiar to millions. A disgraced Swedish journalist, Mikael, is asked by an elderly patriarch (Christopher Plummer) to investigate a forty-year-old killing. His security check was done by a young, alienated ward of the state, polymath and hacker Lisbeth Salander, who eventually becomes his researcher, collaborator, tentative friend. Where Noomi Rapace, in the Swedish adaptations, conveyed a feral intelligence, a sustained suspicion, behind her eyes and postures, Rooney is more coiled, a small edifice of compacted rage.

The editing is bracingly rapid, proceeding in layers like the most adroit of Google searches—which Lisbeth is shown at—layers of nesting information probed by restless intelligence, which essentially describes her neo-Asperger’s condition of noticing, noticing, never not noticing: and perhaps Fincher’s as well. The sound design, by Fincher’s customary designer Ren Klyce, also speeds ahead at a dazzling pace, as fleet as the littlest mouse feet. Anyone familiar with the novels or the earlier film will detect an off-kilter sense of humor, but the movie is about misogyny, Nazis, serial killers. Still, Zaillian’s lines are direct, never wasting a syllable: “Usually when I wake up in a cold bed, it’s at home”; “Isn’t it interesting how fascists always steal the word freedom?”

Lisbeth’s foil is Mikael, a lovely, intelligent and melancholy Daniel Craig. He watches his subjects, he observes the compact, driven fury of Lisbeth, he doesn’t have to ask, we watch him as he sees. A listener, not an interrupter. She forges respect through pain in one fine scene, sewing Mikael’s brow wound with dental floss: just shy of proffering him a tattoo. And her “I like working with you,” which gets the loaded, multilayered response “I like working with you” is the sweetest of adult exchanges.

Lisbeth masters arrays of information, charting details with the alacrity of a born production manager, but so does the film. The small details of information are precise: a coffee bar’s emblem of a fresh cup of latte is even more suggestive of Jean-Luc Godard’s universe-in-a-demitasse image from “Two or Three Things I Know About Her” at the end of the film than it is at the beginning. Clocks bristle, time kept in distant corners of the frame. A Kurt Vonnegut caricature tossed into a fire. A repeated joke about McDonald’s Happy Meals is more affecting than coarse because it’s off to the side in its frames. A Swedish Christmas “light of life” crown appears in multiple locations, Christ’s suffering readily referenced over in the corner. The sound and sight of a smashed tooth spat. Letters on a hacked email spit out: “What going on with these two fucking assholes?” and strings of green computer code racing past with the most serious of search delimiters. Lisbeth’s here-unnamed hacker pal wearing a “NIN” t-shirt. Lisbeth, on the other hand, megapetite in her worn-and-all-but-chewed black “FUCK YOU YOU FUCKING FUCK” t-shirt, as broken in as a comfy practiced scowl. The squeak of her leather jacket under a hoodie as she tenses is another matter, like the gentlest ping as she leathers with a thumb the lipstick print of her red lips off a bone-white coffee cup. The sounds of the world alarm her very spine.

Murder, we are told is “a science of a thousand details.” And so is “The Girl With The Dragon Tattoo.” Those are the fragrant glories of a movie the winter palette of which is built on hues of steel and bone, but in essence, it’s a procedural as elegant and elemental as a paperclip, percolating with the dense, splendid score by Reznor and Ross, which transforms rolls of pulp into fleet, pulsing bloodstream. Galvanic, subcutaneous: it’s heard and felt and serenely somersaulting.

By the end, Lisbeth is more proletarian than Goth, cliché punk: she’s a warrior against patriarchal violence woven into the Swedish system, yes, but in elaborating on the book’s closing, leaping joyously into its pulp absurdity, turning her into an adroit con woman in a field you wouldn’t expect, on the scale of a Russian oligarch, the movie becomes very much about class and a twisted form of economic justice. The ending, taken from the book, is a small—yet imperative—emotional wilt. And the sound of a motorcycle roaring. Silent snow. A solitary motorcycle in Stockholm night, receding, fading, gone.

“The Girl With The Dragon Tattoo” is now playing.