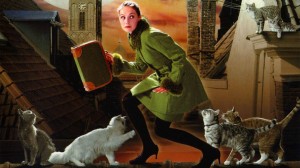 Nothing more than felines. Vincent Bal’s 2001 beguiling Dutch family film, “Miss Minoes,” which won a Best International Feature nod from the Chicago International Children’s Film Festival (2002), gets a worthy big-screen outing. Talking cats! But without rampant CGI and conga-line-scaled musical numbers. (A puppet here, a daffy mouth there.) A Siamese cat who laps from the wrong puddle from a chemical drum fallen on the side of the road turns into Carice van Houten, whose cat-like habits and allure persist even in human form. (And local cats recognize her as one of their own and continue to have conversations with her.) The tone of the film matches Bal’s sweet-tempered statement, “Maybe after seeing the film kids will gaze over the rooftops at night and imagine a magical world there? Maybe they will start talking to the cats on the streets? I really hope so. (And I can only hope that the cats are polite enough to answer.)” You could predict most of the complications, but modestly bumptious and brightly colored, it’s a small treat. With Theo Maassen, Sarah Bannier, Hans Kesting, Olga Zuiderhoek, Jack Wouterse, Pierre Bokma. 88m. English-dubbed. (Ray Pride)