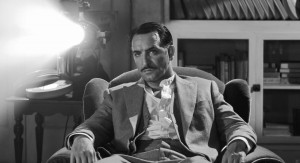 “I won’t talk! I won’t say a word!” is the promise made in the opening scene of Michel Hazanavicius’ soundly entertaining “The Artist.” Keen pastiche, the terrific new trifle by the maker of the “OSS 117” spy spoof series, offers a “Singin’ in the Rain”-variety reassurance to the modern movie industry that its origins were joyous and true and good. To appropriate Jonathan Rosenbaum’s phrase, “Goodbye, cinema: hello, cinephilia.” Masses will be entertained, and rightly so. It’s not a feel-good movie; it’s A Feel Great Movie! But however buoyant, “The Artist, ” set in 1927-31 in the waning of the silent era, lacks the true needling naughtiness of actual exemplars from the time, like Raoul Walsh’s cheeky, kinetic 1933 “Sailor’s Luck,” to which Dave Kehr has been introducing audiences around the country in the past year. It’s like a $12 million Guy Maddin film, but without obsessions, peccadilloes, stylistic tics or bravura ruptures. Shot at Hollywood studios and on Los Angeles locations, “The Artist” is a feast of toothsome gloss. The Academy will lap it up gratefully, then lash it into a cage match with “Hugo” for best digitally-projected pentimento of a silver nitrate-print past. Ludovic Bource’s comprehensively ebullient score is scheduled to tour live with “The Artist”; more well-listened ears than mine will pick up which composers from the classic era are most leaned upon. With the timeless features of Jean Dujardin as the mustachioed star of the ending era, John Goodman as the barking studio head, and Bérénice Bejo as aspiring flapper-dancer “Peppy Miller” (good name; your work is done), James Cromwell, Penelope Ann Miller. Not to forget Uggie, a Jack Russell terrier among Jack Russell terriers. Woof! 100m. (Ray Pride)