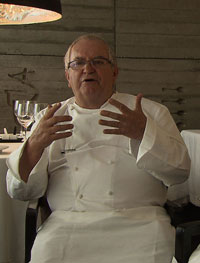 Lutz Hachmeister’s genial “Three Stars” (Drei Sterne) is another welcome addition to the smorgasbord of approaches to documenting the endlessly fascinating process of how food is prepared. Nine Michelin-starred chefs on three continents allowed the filmmaker into their kitchens, with an emphasis on their philosophy and routine. “They laugh because they don’t know what it means,” a sommelier says of what his friends know of his work, leaned back in a chair after served, “But when I explain? They think it’s great.” “Three Stars” is much, much more fascinating than any pile of pages from the gnomic volumes of Michelin ratings: we’re seeing sensation, exploring method, instead of reading bad writing. The chefs on show: Jean-Georges Vongerichten (New York), Yannick Alléno (Paris), Olivier Roellinger (Cancale, France), Sergio Herman (Sluis, the Netherlands), Sven Elverfeld (Wolfsburg), Juan Mari and Elena Arzak (San Sebastian), Nadia Santini (Runate, Italy), Hideki Ishikawa (Tokyo), René Redzepi (Copenhagen). 94m. (Ray Pride)

“Three Stars” has its U. S. theatrical premiere at Facets on Friday.