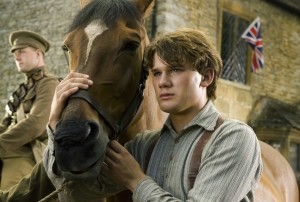 Steven Spielberg’s second release in this week, “War Horse,” adapted from Michael Morpurgo’s 1982 bestseller by Lee Hall (“Billy Elliot”) and Richard Curtis (“Love Actually”) is a grandiloquent tearjerker galloping after movie-movie magnificence, square jaw jutting to the horizon. Beginning in the English countryside before World War I and segueing into Europe for the Great War, “War Horse” charts poor young Albert (Jeremy Irvine) and his farm family against the wealthy man they lease from. When his father (Peter Mullan) buys a stallion for a ploughhorse, a love story is born, boy and horse against the world. And it will soon be against the world, when the horse, Joey, is sold to the army. Melodrama + horses = gawping, sniffles, tears. It’s lovely, classical, predictable and thoroughly satisfying. Striking, too, is the attempt to keep frames wide and landscapes central, working off the vocabulary of large-scale moviemaking, and especially British films, of the middle of the past century. (Artificial lighting on faces in the lush outdoors is one of the most striking effects.) There’s one scene of sustained terror in the battlefield that, formally, is one of Spielberg’s best, as Joey confronts “modern” warfare with equine incomprehension. And if horses are innocents sent to die for incomprehensible aims, what are young men? (Linger not.) John Williams, as always, provides the melodic bombast and the characteristic grime of cinematographer Janusz Kaminski is well suited to trench warfare.