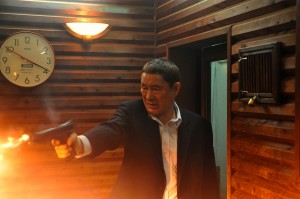 When does work become a “work”?

Almost as fascinating as the cool, perfectionist sheen of David Fincher’s version of “The Girl With The Dragon Tattoo” is the tattoo of tales of the making of the movie. Collaborators seem to go to special lengths to point out that the painstaking focus Fincher applies to his work is just what he does: his splendid perfectionism isn’t workaholism, it’s work, the work. He’s Lisbeth Salander in his own immodest analytical skills. As the film industry transforms in so many ways, in every way, from distribution to projection to production, the directors who’ve unapologetically forged their own way are often as fascinating behind-the-scenes as they are on screen. Steven Soderbergh’s notorious impatience and persistent productivity would be a case, starting with acting on most features as his own cinematographer, camera operator and editor, realizing a net gain in production time when there are fewer collaborators to explain things to. He’s also a relentless cutter: “Haywire,” opening later in January, his personal take on action films built on fight choreography, clocks in at about eighty-five minutes without credits.

On the micro level, where more and more movies are being made with entry-level, “prosumer” cameras and Final Cut Pro, there are stories like Edward Burns’, who touted his “Brothers McMullen” as a $25,000 project upon its 1995 release, and who now claims an out-of-pocket cost of under $10,000 for his Tribeca-set walk-and-talk romcom. It debuted on several video-on-demand platforms, and its booking next week at Siskel is one of its few theatrical outings.

Disenchanted with extended editing periods, Chicago filmmaker Joe Swanberg began shooting his projects in brief bursts and editing them quickly. How many movies did he make in 2011? I don’t know if he can give a full accounting: there are seven or so I’m aware of, each at a tidy seventy-one minutes or so, permutations of similar themes and concerns, like a serial edition of one incredibly long film. With New York’s Factory 25 label, Swanberg’s attempting a subscription series, with four films a year by subscription for $99.95. On the series’ splash page, Swanberg writes, “None of these films are fun; they’re my guts being spread out on screen.”

There are dozens of other examples of how careers are being dashed and formed, crashed and re-formed, from the festival circuit to the studio system, and that’s not even considering the splendid things nonfiction filmmakers are doing with narrative form. The latest film by Takeshi Kitano prompted this line of thought, with this filmmaker’s literal splattering of guts. “Outrage” is a return to the genre of the Yakuza action film, or more properly, a return for Kitano to the deadpan, supremely violent Takeshi-Kitano-Yakuza-film, a thing of its own beauty and trouble. Yet the feature films the almost-sixty-five-year-old writer-director-producer editor-star continues to turn out pretty much annually are the export version of the “work”: he still hosts several television series, ranging from current-events talk shows like “Beat Takeshi’s TV Tackle” to game shows (some of which are repurposed and dubbed on American cable).

Of his sixteen features, Kitano’s “Fireworks” (Hana-bi) (1997) was the first one that startled me: its idiosyncrasies reportedly startled the Japanese as well, and his greatest defenders were, for a time, from outside that country. His recent “failure trilogy,” “Takeshis” (2005), “Glory to the Filmmaker!” (Kantoku Banzai!) (2007) and “Achilles and the Tortoise” (2008) are alternately tortured and sweet-heartedly charming, questioning his work as a filmmaker and as a media personality in “Takeshis,” but finding elegant sight-gag comedy in “Achilles,” which is dumbfoundingly faux-naif but all the more lovely for it. None of these three films are readily available in the U.S., but “Outrage,” which debuted on video-on-demand is now blown up to cinema scale at Landmark Century (part of the Landmark Theatres circuit, owned by the same company as “Outrage” distributor Magnolia Pictures). The questions he’s asking and the answers he’s finding are about work or, more properly, the work. Kinetic, dynamic, bloody, violent: medium shots of faces, tracking shots, steely blue-to-gray color palettes, extravagant physical punishments, elegant Yohji Yamamoto suits, cascades of machinegun fire that are as much displays of fireworks as of vengeful violence.

You don’t believe this is the world for a second: but it’s Takeshi’s world, it’s not guns and poses, not a commercial compromise, or a return to a form he’s succeeded with before—he’s made plain in word and deed that his films are not his money gig—than a place he has to return to, a ritualistic form that is less about gangsters than about Takeshi Kitano at work, on the job. Filmmaking, for better or worse, can almost always be extrapolated as being about the act of filmmaking itself.