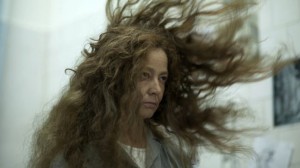 In “The Devil Inside,” William Brent Bell’s mock-documentary, Isabella (Fernanda Andrade) travels to Rome with filmmaker Michael (Ionut Grama) to investigate an attempted exorcism twenty years prior that left Isabella’s mother (Suzan Crowley) committed in a mental hospital outside Vatican City. After an unsettling reunion leaves her unsure that her mother’s affliction is psychological, she appeals to devout David (Evan Helmuth) and cynical Ben (Simon Quarterman)—both of whom are ordained priests as well as exorcists—for help. When Isabella and Michael accompany the two priests to an exorcism to learn about possession and determine the truth about her mother, they fall into a world of the possessed that puts all their lives and souls at risk. The film bridges the gap between the world of “The Exorcist” and the intimate atmosphere of “Paranormal Activity,” offering a nerve-wrenching exploration of possession. Despite a reliance on overplayed tricks of the genre, tension-borne scares still deliver the desired uneasiness and anxiety, aided by bone-crunching contortions and unsettling performances from Crowley and Bonnie Morgan as the flaky-skinned, preternaturally strong possessed. Screenwriters Bell and Matthew Peterman flounder as the film goes, failing to engage a potentially riveting discussion on the bureaucratic nature of the Church and the balance between religion and science, and abandoning them entirely before the credits begin to roll. Up-close and unnerving, “The Devil Inside” still doesn’t realize its potential, and leaves audiences with an ending so abrupt that its bitter taste lingers far longer than any of its scares. (Made for under $1 million, its estimated weekend gross: a not-so-gross $30 million-plus.) 83m. (Kristen Micek)

“The Devil Inside” is now praying.