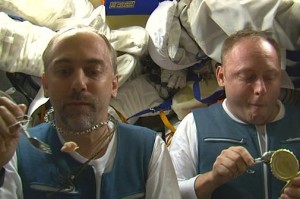 When the dream to become an astronaut can be attained only by having already become a decamillionaire… That’s the world we live on, and some of us hope to rocket from. Videogame designer Richard Garriott’s father was an astronaut, but his own hopes were dashed when he developed nearsightedness in childhood. (Garriott was one of the founders of MMORPGs, or “Massively Multiplayer Online Role-playing Games.”) But what if you had the money in advancing years to found a company—”Space Adventures”—and could scrawl your name onto a $30 million check to buy your way onto Russia’s Soyuz and the International Space Station? Woolf takes insufficient pains to demonstrate that Garriott isn’t a moneyed oligarch dilettante, as he follows the year training with the Russian space program in “Star City” to become the first son of an astronaut to go into space. Director Mike Woolf captures the intensity of preparation (and Garriott’s overarching self-promotion), and then Garriott shoots his point-of-view once in space. While lightweight, “Man on a Mission” is still a likeable glimpse of an experience almost no one has ever had firsthand. (Space, not splendiferous wealth.) 83m. (Ray Pride)

“Man on a Mission” opens Friday at Facets.