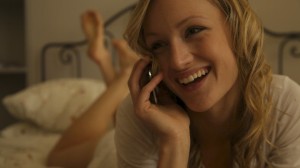 Synopsis is the devil, but sometimes the devil is in the details. Here’s Tribeca Film’s synopsis of writer-director-actor-producer Edward Burns’ microbudget romantic comedy and fan letter to New York’s upscale Tribeca neighborhood, “Newlyweds”: “Buzzy (Edward Burns) and Katie (Caitlin FitzGerald) are a newly married couple living a seemingly conflict-free life. But when Buzzy’s damaged and impulsive half-sister Linda (Kerry Bishé) arrives at their doorstep expecting to stay for an indefinite period in their Tribeca loft, her antics threaten to disrupt the couple’s commitment to an ‘easy’ marriage.” Sounds like any romantic comedy, but it’s more like Woody Allen on a designer shoestring. Grafting pseudo-documentary elements onto a shoehorned armature of romantic complications, Burns manages a winning breeziness between Buzzy and Katie, but the film may be most notable for having gotten to the screen for a claimed $9,000 out-of-pocket, working with a three-man crew and the “prosumer” Canon 5D camera. “We shot in half a dozen restaurants in the neighborhood, while they were open for business,” Burns has written, and “we captured most of my favorite streets in the low light of winter, including N. Moore, Greenwich and Varick.” That scrappy drive and a shelf moaning with forty-five Woody Allen DVDs does not a genre make—even Allen’s found it hard to duplicate the chatty, offhand, relentlessly romantic banter of his best sidewalk-savvy walk-and-talk movies—but “Newlyweds” makes sweet diversion. (Now, Gordon Willis and a Manhattan sidewalk: sure, any time.) U.S. theatrical premiere. 93m. (Ray Pride)