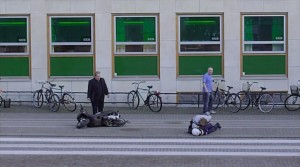 Seven shorts from the 2011 edition of the Sundance Film Festival make it down the slopes via The Sundance Institute Art House Project, including one of my favorite shorts I saw last year. (The best short I saw from Sundance, David Lowery’s tale-spinning bedtime story of the American empire, “Pioneer,” isn’t in this selection, but it elevates issue 14 of DVD “magazine” Wholpin.) Ruben Östlund’s Swedish “Incident by a Bank” (12m) is a single-take reconstruction of a failed bank robbery in Stockholm in 2006, the camera taking a Altman-cum-Asperger’s route around the story’s particulars, and it only gets better by the moment. Trevor Anderson’s “The High Level Bridge” (5m) is a deadpan history of those who have jumped from Edmonton’s High Level Bridge into the Saskatchewan. Dour, picturesque… eminently Canadian. Ariel Kleiman’s “Deeper than Yesterday” is a peculiar fable about Russian sailors losing their bearings about three months underwater, shot in a range of brooding blues and grays, cold as arctic water. 88m. (Ray Pride)