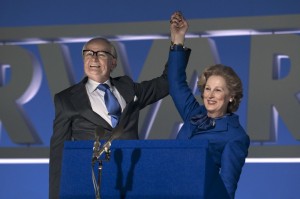 Actors long to play the bad guys, and even better, to find the “privileged moments” that define some kind of “humanity” or poetic truth beneath, beyond their essential callousness. Working from a screenplay by British savor-of-the-month Abi Morgan (“Shame”), “Mamma Mia!” director Phyllida Lloyd works across the scrim of the advanced mental failings of elderly Margaret Thatcher to create an acting showcase for the great Meryl Streep. The great Meryl Streep—in the conflicted, confounding, sometimes risible “The Iron Lady.” Less memory poem than memory doggerel, the cold history on screen should well infuriate any side of the British political aisle, and has especially inflamed her elderly peers who survive to simper another day. (Thatcher herself has been left to silence for years.) Streep’s intonations, gestures, would well leave anyone not familiar with Thatcher in her time with an impression more Thatcher than Thatcher: she creates an emblematic portrait of a powerful woman who perhaps would have wished to be thought “Shakespearean” instead of brittle, brutal and dismissive of the working people of the United Kingdom. In press notes, Lloyd waffles: “What sets this film apart from a conventional biopic is that the whole story is told from her point of view. So the audience doesn’t know whether what is depicted is true or not. This is her version of her journey. There is no other perspective on the political events.” Which means the masses, the public, are in Lloyd’s view as voiceless as Thatcher would have had them be. If not for Streep, this is the sort of limp tosh readily relegated to late viewing hours of British television. With Streep, it has but one, sentimental audience: ladies and gentlemen of the Academy… we give you Meryl Streep. Cinematographer Elliot Davis (“Twilight,” “Out of Sight,” “Thirteen”) and production designer Simon Elliott are aces at depicting a succession of interiors, which, of course, do not guarantee an interior life. With Jim Broadbent, Richard E. Grant, Alexandra Roach, Iain Glen, Michael Pennington, Anthony Head, Olivia Colman. 105m. (Ray Pride)