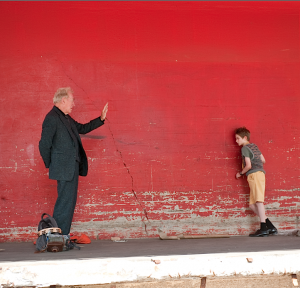 2011 held the release of a bruised, suggestive, over-the-top, under-the-radar, potential narrative masterpiece about the sensations and emotions of 9/11: Kenneth Lonergan’s “Margaret.” Depicting the fragmented consciousness of a seventeen-year-old girl coming to intellectual and emotional life in Manhattan in 2005, it worked as a suitable voice for the times after that fateful day.

In the luxuriantly appointed “Extremely Loud and Incredibly Close,” based on the novel by Jonathan Safran Foer, the voice chosen to exert a similar effort is that of an eleven-year-old boy, Oskar Schell, his mind also anxious with multitudes, but head-on. The literary conceit of Foer’s admittedly precious narrator comes across on screen as something else: a careening depiction of the life of the mind of a small madman and a protracted attempt at wreaking profane sentimentality from the culturally shared emotions of those events. (Plot details are revealed in the remainder of this review.) As directed by Stephen Daldry, three-time Oscar nominee for “Billy Elliot,” “The Hours” and the agonizing “The Reader,” adapted by Eric Roth (“Forrest Gump”) and photographed by the great Chris Menges (“Local Hero,” “The Killing Fields”), “Extremely Loud” is the kind of terrible, errant work that makes you doubt any moment you might have admired of a director’s earlier output.

Don DeLillo, in his crowd-sniffing, paranoia-embracing fashion, wrote 9/11 novels many years before 9/11 and also years before his own slim attempt to encompass those events in “The Falling Man” (2007). Think of one simple image and its fecund chill after the fact of the cover design of “Underworld,” (1997) a black-and-white photo by André Kertész looking toward cloud-cropped towers of the World Trade Center with a crucifix-topped tomb in the foreground, a single bird banking in the foreground back toward the buildings.

“Extremely Loud” is more literal-minded, opening with slow-motion process shots of Tom Hanks (and the bottom of his worn leather soles) envisioned as a “falling man” (despite the fact the film grinds in increasingly desperate answering machine messages that all but assure the character will die in the towers.) Young Thomas Horn, as the too-clever runaway child, is magnificently deranged, a literary conceit brought to babbling life. He’s the most irritating and deadly child character in memory, utterly without empathy.  In olden days, a boy so full of ideas and himself would only earn a pat on the head and a “My! Aren’t you clever,” followed immediately by the grown-ups’ eye-rolling expression of pay-no-mind. But here it’s Gotter-yammer-ung: this filthy little penny does nothing but shine.

Eric Roth also wrought “Forrest Gump,” but that fool found fortune in epigram and apothegm, an open-ended metaphor for whatever ironies viewers cared to discern. The film’s one-sheet is more telling than the boundless logorrhea: a photo-illustration of Horn clutching his cheeks, evoking both Munch’s “The Scream” and “Home Alone”: “Extremely” falls somewhere between those things.

“Extremely Loud” presents a lustrous Manhattan as the kid courses the boroughs in search of someone named “Black” who may have a clue to a key left behind by his father. The streets are filled with light and color fashioned from ostentatious sherbet.

But then there’s this child beavering about with creased-brow would-be-prelapsarian, yet prehensile intensity: can we stop and look at what Menges sees, these warm, luminous streets? No, the score tells us: we have places to go! Promiscuous composer Alexandre Desplat, credited with at least eight scores in completed movies in 2011, called in by the production in the final weeks before release, provides goose and twinkle in his Mickey-Mouse-ing score: Feel this. FEEL THIS. FEEL! MOVE ALONG!

Max von Sydow is a magnificent presence, too, as a man Oskar torments, his sage, elder dignity, dressed in, like all the many other characters, pretty fabrics. (Oskar and his unnamed character share wild-boy hairstyles, rhyming visual Tintin-nabulation.) The cluelessness of the glib decoration is almost obscene, as precious as the smell of rain and as sickly as the smell of rotted flowers on a city sidewalk. It just doesn’t work on screen, especially as he badgers a series of innocents with his ludicrous quest (banging a tambourine much of the way). He’s not a plausible character, although one can empathize with the other actors—Sandra Bullock, Viola Davis, John Goodman, Jeffrey Wright, Zoe Caldwell—who do journeyman work tolerating this sad-eyed boy. Still, these are conceits that should have stayed in a book that you can plummet onto the wall across the room and smash its spine with small but genuine satisfaction.

The final image bookends the opening images with a child, exuberant, aloft, in a swing, in an attempt at celebration of youth’s vitality and a long life yet to be lived: it’s as misjudged as almost every other part of the movie, flying, oblivious, into oblivion.