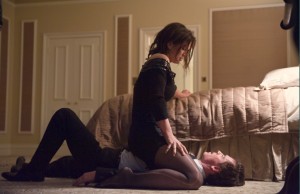 The kick-ass experience: “Haywire” is kinetic neo-pulp that lands halfway between the solar plexus and the lizard part of the mind. The latest by prolific director-cinematographer-editor Steven Soderbergh, working a third time with screenwriter Lem Dobbs, after “Kafka” and “The Limey,” is self-conscious filmmaking, using genre trappings and a multi-double-triple-cross espionage plot to explore Soderbergh’s most consistent latterday theme—where government meets money and money wins—as well as the potential of a distaff Jean Claude Van Damme taking down a succession of handsome male adversaries (with notably crummy haircuts), largely through physicality alone. (The movie’s original, double-entendre title was “Knockout.”) Soderbergh describes the project as a Pam Grier movie made by Alfred Hitchcock, but there are other steely, efficient, thrilling B-movie directors to whom comparison could be made, including Joseph H. Lewis (“Gun Crazy,” “The Big Combo”), or perhaps the simplified elegance of Alan J. Pakula’s quiet rooms where terrible acts are mooted. (Michael Douglas’ government fixer is called “Coblenz,” the name of one of the producers of “All The President’s Men.”) Lewis worked with the same manner of clean, spatially coherent frames that Soderbergh shoots in physical spaces and public locations in Dublin, Barcelona and New Mexico: the camera is locked off in most cases, and each physical confrontation makes sense, both logically and in terms of fight choreography, eschewing special effects or wire work. Her Mallory Kane is a one-woman covert ops Blackwater/XE/Academi, estranged from a “contract security” gig that’s just gone wrong; the press kit tips Carano’s skills in Muay Thai, Karate, Jiu Jitsu, Judo, wrestling, boxing, kickboxing and Kung Fu. Soderbergh watches Carano the way other directors watch dancers, and he’s especially, rightfully, attentive to the curvature of her strong calves. The sign of a Greek restaurant shows up in the background during a foot chase in Barcelona—”Dionisos”—and “Haywire” does not neglect physical ecstasies. (Another curvy visual motif is multiple displays of the swoops and turns of wine glasses, champagne flutes, snifters.) It’s surprising more filmmakers haven’t found their own vocabulary for the action film along the lines of John Woo’s 1990s “bullet ballets.” Carano’s adversaries include Michael Fassbender, Ewan McGregor, Channing Tatum, Antonio Banderas and Michael Douglas, with a charming turn by Bill Paxton as Mallory’s father, especially when he observes, face frozen, what his daughter has learned to exact. Dobbs’ script is terse: “I don’t even know how to play that, I don’t wear the dress” is matched by the exchange, “I’m assuming the motives of everyone involved are strictly professional”; “The motive is money. The motive is always money.” Like a jab. Like a kick. A knockout. 105m. (Ray Pride)

“Haywire” is now playing. The first five minutes are on Hulu.