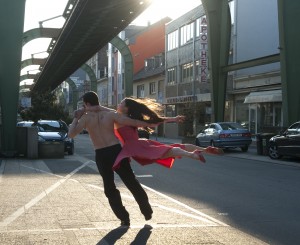 A simple scrim, lightly dancing, a sheer of muslin, ripples across the screen at an acute angle, like a movie screen, but translucent, in the briefest instance of prestidigitation introducing the 3D element to Wim Wenders’ “Pina,” a film for his late friend, dance choreographer Pina Bausch. In its own fashion, it’s as revolutionary a way of introducing the rare, effective stereoscopic effect as James Cameron’s slow reveal of the far reaches of the highly active spaceship in the opening shot of “Avatar.” Wenders was extremely articulate about the low-budget experimentation that led to the form of “Pina” in a keynote address to June 2011’s Toronto International Stereoscopic 3D Conference, which is worth finding on his website. He’s a full-on convert: “I mean: for a hundred years cinema had invented splendid tricks which I loved and cherished (and still do) to overcome its huge deficit. It had always made us believe that ‘space’ was actually available on the screen. By moving the camera on tracks, on cars, on helicopters, by dropping it from planes, by letting it float and fly—Abel Gance had swung a camera through a room hanging on a rope, in 1927!—cinema had created the illusion that it had a grip on ‘space.’ That we were, indeed, on a ‘Space Odyssey.’ But it had always ended up on a two-dimensional screen.” While Wenders here undersells the century-old craft of “sculpting in time,” to use Tarkovsky’s weighty phrase, and his forthcoming 3D documentary on architecture could well be of promise, there is simple joy throughout “Pina,” including a series of “interviews” with her dancers, which are simple close-ups as their musings are heard on the soundtrack in various languages. Faces in a frame, features flickering, of different ages and races, still, but moving, in 3D. It’s a lovely effect, and one Wenders says he discovered late in the editing process when the money was gone. (There are bursts of dance outdoors, in Bausch’s beloved home base of Wuppertal, but the most dazzling moments are onstage, where the camera divines ways to shape that box of space.) Wenders is sixty-six, and his countryman, Werner Herzog, whose “Cave of Forgotten Dreams” is also in 3D, is sixty-nine. But they’re kids with a new toy: they haven’t forgotten how to look, and how to see. 103m. (Ray Pride)