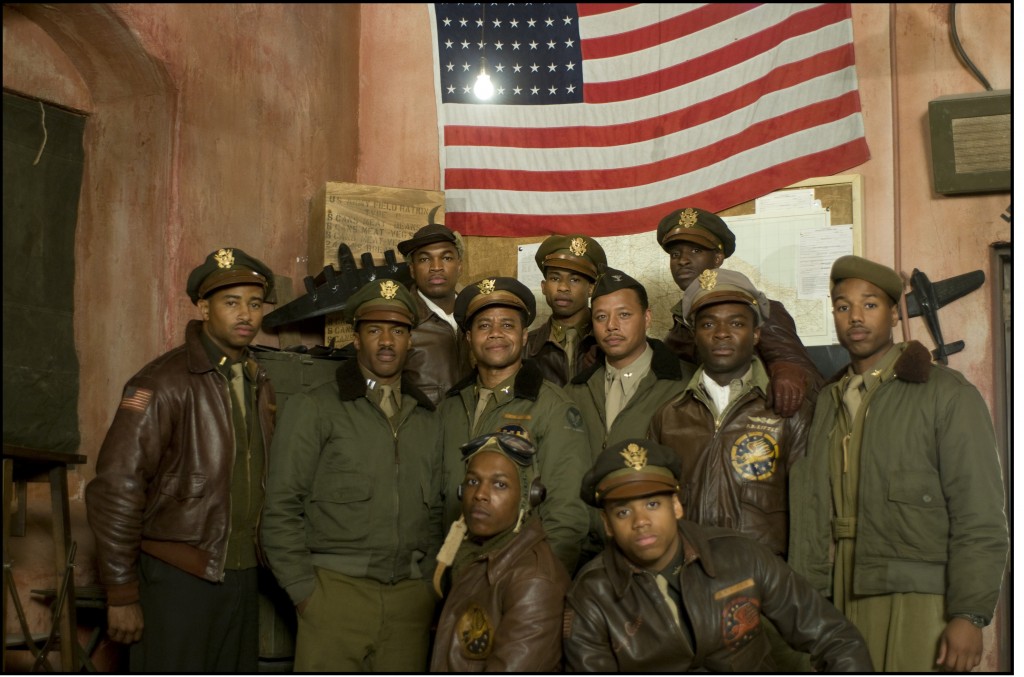 Executive producer George Lucas boosts a young trio from cable television to B-moviedom with a very retro WWII film. Director Anthony Hemingway (first assistant director on “The Wire”) and writers John Ridley (“The Wanda Sykes Show,” “Three Kings”) and Aaron McGruder (“Boondocks,” comic strip-turned-cartoon series) relate the heroics of a band of brothers in the 332nd Fighter Group based at Ramitelli Airfield in Italy in 1944. “Red Tails” opens with a quote from General H.E. Ely’s October 30, 1925 memorandum titled “The Use of Negro Manpower in War.” Blacks lacked the “cranial capacity” and “physical courage” to go to war, Ely claimed. But once the African-American fighter pilots trained in Tuskegee, Alabama got their shot at escorting bombers, they tactically surpassed their white counterparts. “This is an adventure movie and not a civil rights movie,” correctly notes Dr. Roscoe Brown, a decorated pilot from the 100th Squadron, in the publicity material. That’s too bad, because the racial politics are potential ammo for high drama. Instead, we get a black character doing a veritable blackface shtick about how white folks use a rainbow of color metaphors to describe diverse emotions expressed on their faces, yet they have “the nerve to call us ‘colored.'” There is no play in sight with the war film genre, as in “Inglourious Basterds.” Although later dogfights offer throttle thrills, the first aerial scene looks like a low-fi video game. The fighter planes in “Red Tails” (the ground crew painted the tails of P-51 Mustangs red) are equipped with cameras and films are watched after every mission, like post-game footage in the locker room of a football team. A reflexive nod to today’s smart bombs and first-person-shooter games ought to be a no-brainer in a film otherwise alert to issues of imagery and propaganda. With Cuba Gooding Jr., Terrence Howard, Bryan Cranston, Nate Parker, David Oyelowo, Tristan Wilds, Kevin Phillips, Lee Tergesen, Andre Royo, Ne-Yo, Elijah Kelley, Marcus T. Paulk, Leslie Odom Jr., Michael B. Jordan, Daniela Ruah. 125m. (Bill Stamets)
“Red Tails” opens Friday.
Ray Pride