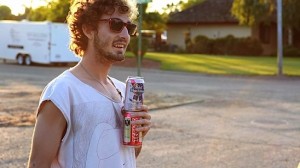 Tristan Patterson’s “Dragonslayer” is an award-winning, audience-pleasing vérité documentary-cum-punk romance that meshes moments high and low in the life of Josh “Skreech” Sandoval, a twenty-three-year-old professional skateboarder from the suburbs of Fullerton, California. There are kaleidoscopic delights in the urgent assembly, as well as omens of potential disaster at most turns. Sandoval’s got an aggravating edge to him as well, dancing woozily on the line of potential success or outright failure, which adds another layer to the film’s aggressive surge. (Part of the agreeable visual style comes from the use of the DSLR-sized Canon 5D Mark II, which allows pleasing images even when the camera’s up in faces.) With Josh “Peacock” Henderson, Leslie Brown, Sid Rocket Sandoval. There’s music by Best Coast, Bipolar Bear, Children, Dungen, Jacuzzi Boys, Little Girls, The Soft Pack, Death and Thee Oh Sees, but the broody score by T. Griffin is tops. Released by Chicago outfit Drag City. 74m. (Ray Pride)

“Dragonslayer” plays January 25 at the Music Box with opening music by Bitchin’ Bajas and Mayor Daley; Patterson will do a Q&A via Skype.