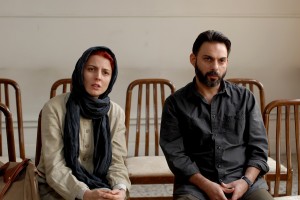 A middle-class Tehran couple separate over differences about whether their family would have better opportunities going abroad or staying in Iran. “In these circumstances…” is the phrase the wife uses in front of an unsympathetic judge, never finishing her thought. Complications ensue, and how: seven central characters’ lives are affected by the outward eddying of this single choice, again and again and again.  Nominated for Best Foreign Language Film and Best Screenplay Oscars, Asghar Farhadi’s “A Separation” (Jodaeiye Nader az Simin) draws on several filmmaking traditions as well as western drama—Farhadi expresses admiration for Tennessee Williams, for instance, and wrote his graduate thesis on Harold Pinter—and it’s a consummate piece of drama, in psychology, structure, visual design, and especially performance. It’s shocking how comprehensible the stakes are for each character at any given moment. “Margin Call,” and “Midnight in Paris” (which was actually based on a short story) for Best Original Screenplay, yet “A Separation”‘s intricate portrayal of issues of class and social interconnectedness rise far above the rest of that field, whatever their own virtues. More on the film and an interview with Farhadi will appear next week. 123m. (Ray Pride)

“A Separation” is now playing at the Music Box.