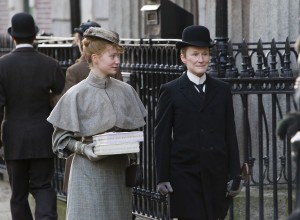 “Albert Nobbs” has been an almost lifelong project for producer-co-screenwriter Glenn Close; she first performed in the play “The Singular Life of Albert Nobbs” for Manhattan Theatre Club Downstage in the 1981-82 season. Director Rodrigo García (“Mother and Child,” “Nine Lives”), with his propensity for sensitive direction of women, seems a proper choice for the tale of a woman who passed as a man for thirty years to survive in nineteenth-century Ireland. The result is eccentric, without being captivating. The performance and the telling are fiercely restrained, displaying mystery and oddness without answering many of the questions contemporary viewers would usually expect fulfilled. “Albert Nobbs” is as much entomology as drama. Close adapted George Moore’s short story along with novelist John Banville and Gabriella Prekop. With Mia Wasikowska, Aaron Johnson, Brendan Gleeson, Jonathan Rhys Meyers, Janet McTeer, Brenda Fricker, Pauline Collins. Close was nominated for a 2011 Best Actress in a Leading Role; McTeer for Best Actress in a Supporting Role. 113m. (Ray Pride)