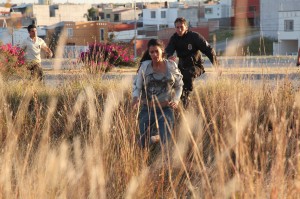 Mexican director Gerardo Naranjo’s brilliant, urgent “Miss Bala,” which was his country’s entry for the Best Foreign Language Film, and easily the best film of 2012 so far, is getting an abrupt release in the Chicago area after failing to make the final five for the Academy Awards. It’s under the Fox International banner, which co-produced the film with Canana, the Mexican production company whose principals include Gael García Bernal and Diego Luna, and it’s their first release in the U.S. “Miss Bala” is the propulsive story of a working-class woman in Baja California (Stephanie Sigman) who wants to enter a “Miss Baja” competition but who falls into a series of coincidences that send her on the run for the duration of the film after witnessing the murder of members of the drug cartel and DEA agents at a club. (“Bala” translates as “bullet.”) Police and criminals alike work to use her to advantage, yet she seems capable of outrunning them all. Naranjo, working with Hungarian cinematographer Mátyás Erdély (Kornél Mundruczó’s “Delta”), composes the action in fluent widescreen and in extended takes, choreographing the convulsiveness of violence, but also how the action occurs in both time and space, rather than being assembled from splinters in an editing room. The result is bracing, drawing from the mobile camera of Erdély’s countrymen like Béla Tarr and Miklos Jancso, but also the macho-anti-macho lyricism of a director like Michael Mann. Naranjo and I had a long talk when “Miss Bala” played the Chicago International Film Festival in October, which I had hoped to publish when I expected it to be released later this winter. A key influence he cited was the fiction of J. G. Ballard, and the notion of alienation within urban space. “Miss Bala” is all that and more, with one thrilling blow-up-blow-out of a cataclysmic shootout in a single, dancing take drawing from all these sources but also with a little of the brackish wit of “Weekend”-era Godard. Yet! There are masterful details throughout, but the weight of Naranjo’s coup is that his third feature wears its influences lightly: it’s crackerjack filmmaking, with Sigman both woman-in-peril and figure-of-Mexico-itself without ever forcing its symbolic hand. It’s the arrival of a major director, and at least it can be seen on a big screen, for however brief a time, in Evanston. 113m. (Ray Pride)