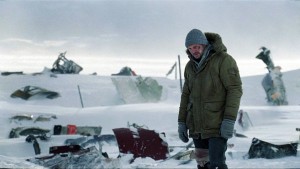 “You’re going to die, that’s what’s happening,” John Ottway soothes a dying colleague, a fear-whisperer, himself a man strangely at peace, reconciled. In the opening narration of “The Grey”—a title reflecting the determination of survival, not wolves—Neeson’s sharpshooter character refers to the Arctic oil roughnecks around him as “ex-cons, drifters, assholes, men unfit for mankind.” Weariness, not loathing or judgment, freights his voice, sonorous masculine gloom. Ottway’s just a grey-beard tucked into a green rag-wool hat, aswirl in snow, eyeing advancing wolves. (“And I’ve stopped doing the world any real good” is Ottway’s sad murmur, more of alienation than self-pity.) Shortly, things grow grimmer: grayer. In a time of timid large-scale movies, “The Grey” is bold in its harsh turns, with obvious dashes of “Moby Dick” and “Jaws”—man against the implacable beast but ultimately himself—as well as moments that hark back to predecessors like Robert Aldrich’s crash-survival “Flight of the Phoenix,” “Deliverance” and John Carpenter’s “The Thing.” (But that’s not to call the movie “derivative.”) Joe Carnahan’s talent as a director of dynamic action was apparent from his earliest movies, including the no-budget “Blood, Guts, Bullets and Octane” (1998) and “Narc” (2002). An assignment to direct an installment of “Mission: Impossible” fell through, and the more recent “A-Team” didn’t impress many. Yet in “The Grey,” a story of men surviving in the sub-Arctic Alaskan wilderness after an accident, Carnahan’s promise is fulfilled. It’s a bravura man-against-the-wilds, man-against-wolves, man-against-himself thriller, fire and ice. And Neeson: worldly, weary, worn. He and Carnahan this time ’round: the Alpha-Team. The blues, grays and whites of the film’s palette chill from the first frames: you can tell straightaway it’s going to be a story of survival against the odds, or earnest failure. The cinematography by Masanobu Takayanagi (“Warrior”) is raw and beautiful. Brute without brooding, it’s a very masculine movie. But there are moments of brisk lyricism: in distance at night, dozens of eyes float in the darkness, a gloaming of fear as much as a phalanx of carnivores. Human blood wells and visibly, audibly ices, defining a track, a huge paw-print. The survivors look toward blackest night, their breath rising in unison in columns like kanji, Japanese lettering. The commercials that have been playing the past couple months have been canny about misdirection: all I’ll suggest is stay through the end credits. With Dallas Roberts, Frank Grillo, Dermot Mulroney, Joe Anderson, Nonso Anozie, James Badge Dale. 117m. (Ray Pride)