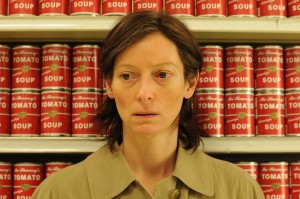 Scottish director Lynne Ramsay’s last released feature was 2002’s “Morvern Callar”; among the heartbreaks along the way was “The Lovely Bones” being wrested away from her for a directorial project for Peter Jackson, whose strange, cruel, bloated adaptation pleased no one. The Criterion edition of Ramsay’s 1999 “Ratcatcher” also holds her shorts “Gasman,” “Kill the Day” and “Small Deaths,” two of which were rewarded with Cannes honors. Simply, she’s a great, bravura, visual, sensual director. Even if you’ve never seen one of her films, you’ve missed her: she’s the kind of intelligent, unsparing filmmaker we could use a dozen of. Her latest, “We Need to Talk About Kevin,” a color-drenched adaptation of Lionel Shriver’s best-selling 2003 novel, also had setbacks before arriving in this fierce form. Tilda Swinton and Ezra Miller are at its gaudy yet chilly heart, embodying a mother and son between whom no love is lost. Swinton’s varieties of exasperation are epic as Eva, and her son comes ever closer to the likelihood of Kevin becoming a Columbine-like teenage killer. (Miller is smolderingly good as well.) Ramsay has the impassioned eye of a painter, with compositions of searing exactitude and colors that startle and pummel, as well as a threatening world teeming with visual metaphor. Cinematographer Seamus McGarvey (“The War Zone,” “Atonement,” “The Hours,” “High Fidelity”) is a splendid accomplice. There’s nothing half-hearted here. The story’s turns are shocking, more shocking than you’d suppose: it’s a magnificent, if imperfect provocation. With John C. Reilly, Siobhan Fallon, Joseph Melendez. 110m. (Ray Pride)

“We Need To Talk About Kevin” opens Friday at River East.