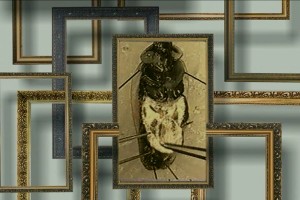 10 Frames (aka My Dog Ate My Homework) by Brian Wyrick

Group 312, the Chicago chapter of Group 101, is a not-for-profit collective of filmmakers who collaborate every month to produce a short based on a chosen topic. Group 101 began in Los Angeles on New Year’s Day in 2000. A year later, Serena Schonbrun and Galina Schevchenko founded the Chicago chapter.

The relaxed group meets monthly to screen the previous month’s shorts and mingle with fellow filmmakers. The viewings often feature a wide variety of genres; the current organizer of Group 312, Richard Syska, says interpretations can be “as abstract as taking the word and using it in dialogue.”

Every month, the filmmakers work independently, either creating shorts from footage they shot or editing together found footage. Participants include those professionally involved in the film industry as well as individuals making their first foray into the world of filmmaking.

Despite the independence of each of the individual filmmakers in crafting their short, Syska says there are elements that do end up feeling uniquely “312.”  “Most of our directors are currently involved or have been involved in creating music so that most of the time the soundtracks are unique to the video and not ‘picked-up,’” says Syska. “I think this contributes to the ‘312 brand’ if there is such a thing.”

Syska said that he became involved in the group after hearing about it from others. He used to do film for many of his music pieces, and liked the idea of being motivated by a deadline to create a new short every month.

Syska likes that Group 312 has inspired many people who have no prior experience with film to get involved–oftentimes people show up to the viewings, and then later decide to start filming as well.

“There is a punk DIY aesthetic to it with Group 312,“ says Syska. “Almost nobody has an excuse not to participate anymore with the level of availability to low-cost video devices and editing software.” (Kristen Micek)

Every year, Group 312 organizes a larger screening of their work. This year’s screening will be held at Chicago Filmmakers, 5243 North Clark, on February 3 at 8pm. More information can be found at chicagofilmmakers.org/cf/content/group-312-films

Watch shorts and find out about upcoming events at group312films.com