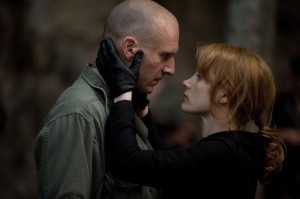 Ralph Fiennes’ slashingly bleak directorial debut, “Coriolanus” is a raucous modern-dress action-movie read of Shakespeare’s war-against-Rome play. Contemporary Serbia is the every-conflict setting for “a place calling itself Rome,” beset with protest and hunger riots. It’s a gruff, bold simulacrum of the twenty-first century, media, graffiti and all. (One of the first shots finds “Fuck The Rules” spraypainted across a banister.) The expected iambic pentameter remains, even in the mouths of “Fidelis TV”‘s newsreaders. Fiennes’ character seems entirely the modern martial martinet, unsuited for any kind of elected office: he’s a one-man GOP debate. He has the superior sneer of politicians in the primaries, the UK, the Eurozone: “What’s the matter, you dissentious rogues, that, rubbing the poor itch of your opinion, make yourself scabs… GET YOU HOME, YOU FRAGMENTS!” Scarier still is his shaven skull with bold blue eyes, streaked with camouflage paint and blood. It’s a gratifying addition to the ranks of stirring contemporary war movies, along the lines of “The Hurt Locker,” which Fiennes acted in, and where he discovered cinematographer Barry Ackroyd. Ackroyd and sound mixer Ray Beckett are also both veterans of Ken Loach’s work, to the benefit of “Coriolanus”‘ texture and sense of immediacy. Compressed by John Logan (who also adapted “Hugo” and co-wrote “Rango” this past year), the text also bears its weight in inter-family conflict and homoerotic bristling. It’s fierce, compelling filmmaking, and lead actors Gerard Butler, Jessica Chastain, Brian Cox and Vanessa Redgrave are marvelous. With James Nesbitt, Ashraf Barhom, Lubna Azabal, Dragan Micanovic. 122m. (Ray Pride)