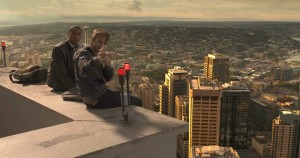 RECOMMENDED
Three high school seniors get high on life in the Seattle sky with a boost from a crypto-organic crystalline thing inside a small cave. After emanating unspecified energies, the plot ejects it. Gifted with a transfer of telekinetic skills, the trio will crash, burn and battle. Ultimately, in Tibet one transcends a fate of demigods. The Space Needle suffers collateral damage on the path to enlightenment, which is chronicled by a digital camcorder. “Chronicle” is an original replay of a raft of screen devices, including the docu-diary format of “Cloverfield,” among other films, but tyro director Josh Trank and co-writer Max Landis add a smart entry to the shelf of teen-angst dramas. “It’s a superhero movie that’s not really a superhero movie,” tout the press notes, in a rare case of insightful hype. Andrew (Dane DeHaan) is a loner and principal camera operator, per plot, if not the end credits for photography. The film opens with him shooting his locked bedroom door in close-up as his drunk dad screams from the other side. That former firefighter on disability cannot afford the $750.83 co-pay refills for his sick wife’s pills. Andrew is bullied at school, slapped around at home, and tormented by lowlifes on his block. His cousin Matt (Alex Russell) is the class intellectual who imports snippets of Schopenhauer and Jung, along with the terms “hubris” and “apex predator” into dialogue. This is the creaky, if workable way for Landis and Trank to signal their own bigger ideas. Andrew and Matt are joined by campus politico Steve (Michael B. Jordan) who cracks wise about the government and Mormons. They bond in their weird encounter in the cave, where Matt makes an unappreciated Plato quip prior to an electromagnetic pulse that makes the camera black out. Besides “X-Files”-like nosebleeds, they now share powers to move things at will, unmindful of Matt’s earlier footnote about “beings of pure will.” The boys do a “Jackass”-type stunt in the backyard, levitate a teddy bear in a toy store, repark a shopper’s car at the mall, score at beer pong, and ace the talent show with a card trick. When they can move themselves through the air, we get a contact high on their flights of ecstasy. Mastery of emotion is another matter. Ever the philosopher, Matt insists on a three-point code of ethics to delimit use of their superpower. He wants to do good. Andrew just wants to add force to his words “Don’t tell me what to do” and “Leave me alone.” Over-the-top payback cuts short his prospects as a cinematographer who can will his lens to capture overhead shots to equal those in “Enter the Void.” With Michael Kelly, Ashley Hinshaw, Bo Petersen, Anna Wood. (Bill Stamets) 84m.
“Chronicle” opens Friday.
Ray Pride