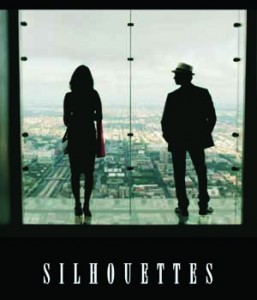 “Silhouettes” takes the heart of a romance, the weight of reflection on culture and race and the pain of isolation and transplants them into the city of Chicago and a single day. Screenwriter Tom Silva, with co-writer and director Gustavo Bernal-Mancheno, have created a love story about Aamod (Silva) and Nadia (Fawzia Mirza), two successful individuals drawn together by a chance encounter and a common sense of discord in their lives because they are torn between two cultures. The film’s combination of themes and genres is an attempt to break free of the preconceptions of ethnic characters and make a poignant and accessible film.

Silva, who moved to the United States in his mid-teens, directed and wrote the screenplay for his 2010 independent film “The Quiet,” and is the lead singer and songwriter in the band Clara May. Both his own experience and his academic background—he is pursuing a graduate degree in Humanities at the University of Chicago—drew him to create the story of “Silhouettes.”

“Ethnic characters are put on American movie screens and they are trapped within this ethnic frame,” says Silva, adding that most are powerless and struggling against social injustice. “I’m trying to take these characters out of that frame. The leads in ‘Silhouettes’ have incredible amounts of freedom and cultural capital.”

The project continually evolved: Silva and Bernal-Mancheno collaborated on rewriting the initial script, and elements of the actresses’ lives were incorporated into their characters. The characters portray the diversity of India, as well as that of the United States. One character is Christian, another Muslim, and the third Hindu—a fact that Silva says was based on his and the two lead actresses’ decision rather than a predetermined choice. Each character has mobility and influence. Silva wanted to create characters that shift and have complexities, rather than the one-dimensional ethnic characters he often sees in films. Not only do they evolve over the course of the film, but they are not relegated to a single, static role in their lives.

The Hindu character portrayed by Puja Mohindra takes the idea of the arranged marriage and uses it to improve her station in life. She agrees to it because she wants to use it to her advantage, as she is marrying someone who will be able to afford her independence and influence. Silva said that Mohindra had this “element of Bollywood glamour crossed with this ultra-modernism” that made her perfect for the part.

Nadia, the other female lead, is a strong and confident Muslim who left her conservative family to pursue a successful law career and is now returning to see her family for the first time. “Mirza has this confidence and salty sense of humor,” says Silva of the theater actress. “She is the Indian character that we don’t typically see on screen.”

The film focuses on the internal struggle that people must face when trying to balance two different worlds, the one that they come from and the one in which they are living—in this case the traditional East and the modern West. There is the question of whether one loses something crucial by ignoring their past or if doing so is the only way to progress—a discussion that Aamod and Nadia delve into themselves.

“The overriding mood of this film is that their time together is very limited,” says Silva, noting that the film takes place over the course of a single day. “The music was written to evoke a sense of time passing.”

Not only does the music mirror the characters’ fleeting time together, but it was crafted to fit the duality the film presents. Silva wrote the score for the film himself—with the exception of one piece—combining Midwestern indie rock with iconic Indian instruments, including the bansuri flute.

Chicago also creates a sense of duality, portraying a sense of dislocation as well as romance. Bernal-Mancheno created a visual strategy for the film that incorporated various tracking shots to highlight the diverse landscapes and cultures of Chicago from neighborhood to neighborhood. “It’s a love letter to Chicago,” says Silva. “I wanted a film that was outdoors that explored the city, parts of the city that never got seen on film.”

Silva is quick to note that despite the themes, the film is not intended for a niche audience, but rather meant for the general public. “The film has to work at the level of a romance first,” he says. “It has to prove that ethnic characters are universal and that they can embody universal themes.”

“Part of what America embraces is that notion that you can be many things at one time and shift them throughout your life,” says Silva. “I hope that ‘Silhouettes’ can show that ethnic characters are not one thing either.”

The film recently received a $25,000 grant for funding and U.S. distribution from Chicago-based Gorilla Tango Productions, and will be released for the festival circuit. More information on the film can be found at: gorillatango.net/p/6.