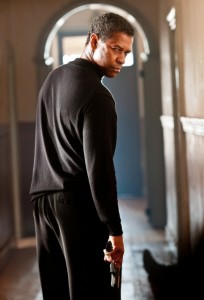 CIA operatives can star in a thriller as long as the screenwriter smears their handlers. Plot protocol calls for secreting the enemy inside Langley instead of a terrorist cell or rogue state. That takes care of qualms about fetishizing an extra-legal agent in the field or off the grid. “Safe House” is a high-functioning case of pairing a senior and a junior agent, like “Spy Game” (CIA), “The Double” (CIA and FBI) and “Traitor” (FBI). David Guggenheim scripts a renegade CIA operative unseen for nine years who is “wanted for espionage on four continents.” Tobin Frost (Denzel Washington) has digital files exposing dirty operations conducted by the intelligence agencies of assorted nations, including the U.S. Originally compiled for purposes of blackmail, but now on the market for $10 million, all this meta-intel is fated for a Wikileak-like ending.Statecraft relies on “noble lies,” as Plato called some of our pre-film fictions. Tobin also has his own dirty, guilty secrets that motivate his apparent treason. On the run around Capetown, Tobin will team with Matt Weston (Ryan Reynolds), a young CIA operative on duty as the “housekeeper” of a local safe house. Although director Daniel Espinosa says, “My background is more European art house,” “Safe House” is safely in the U.S. action style for a global market. Cinematographer Oliver Wood (“The Bourne Ultimatum,” “The Bourne Supremacy”) shoots an ugly kind of gritty. Time-stamping the day, hour and minute on the screen is really not useful here since there is no countdown or deadline. The chases, though, stand out. The buddy trajectory is less engaging: Tobin initially messes with Matt’s mind and later mentors his designated keeper. The op-ed dialogue about civilians may apply to screen fans as well: “People don’t want the truth. Keeps them up at night.” In the tradition of “Three Days of the Condor,” there’s a corny faith in transparency. With Vera Farmiga, Sam Shepard, Brendan Gleeson, Liam Cunningham. Fares Fares, Robert Patrick, Joel Kinnaman, Ruben Blades, Nora Arnezeder. 115m. (Bill Stamets)
“Safe House” is now playing.
Ray Pride