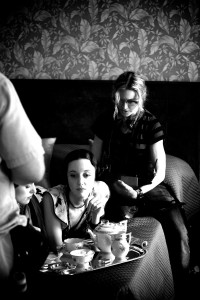 Daydreams: of wanting and being wanted (object and objectified); of living inside W magazine large-format multi-page spreads; of being Madonna, becoming Madonna and then being admired for being Madonna. And of being a filmmaker as perfumed and as admired as Wong Kar-Wai. What daydreams money could buy:  director-co-producer-co-writer Madonna’s second directorial outing, “W. E.,” co-written by Alek Keshishian (“Madonna: Truth or Dare,” “With Honors”), is an exceedingly strange and shiny object. The light captured by cinematographer Hagen Bogdanski (“The Lives of Others,” “The Beaver”) is bright and the colors bold as two stories are intercut. As an auction approaches in New York in 1998, a lovestruck woman (Abbie Cornish) is drawn toward whatever stories she might imagine through the artifacts of Wallis Simpson (Andrea Riseborough) whose passion drew the King Edward VIII of England (James D’Arcy) from his throne. The versatile Riseborough might well have sung lines like “You have no idea how hard it is to live out the world’s greatest romance.” The clearest dissection I’ve read about the movie comes in a couple of remarks made on Twitter in early February by Bret Easton Ellis: “‘W.E.’ taps into female fantasy more vividly than maybe anything I’ve seen. It’s about Jennifer Aniston as much as it’s about Wallis Simpson. ‘W.E.’ is about a certain type of packaged media-sold female fantasy, and the projection accompanying it. And, of course, it’s about Madonna.” Sold! Say no more! We’ve bought the product that’s being advertised for decades now. The insistent score, by Abel Korzeniowski and Stuart Price, wishes to remind us of music like Michael Galasso and Shigeru Umebayashi composed for “In The Mood For Love,” and it does, to its detriment. While the end credits are missing a name reported from its Venice premiere (Leni Riefenstahl), the intriguing footnotes still include Balthus, Zadie Smith, Paul Smith and John Galliano. 118m. (Ray Pride)