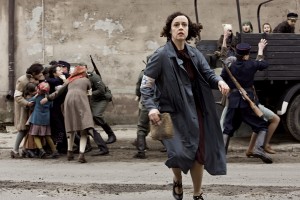 Polish director Agnieszka Holland reportedly waited a decade to make “In Darkness”—another dark telling of an aspect of the Holocaust, no matter how compelling the true story, put her off. (Her “Europa, Europa” was released in 1990.)  In the occupied Polish city of Lvov, a sewer worker who is Catholic but also a petty thief and a devoted family man becomes an unlikely savior for a group of eight Jews escaping the liquidation of the ghetto, and even more unlikely is the time spent under the streets: fourteen months. With dialogue in Polish, German, Yiddish, Hebrew, Russian, Ukrainian and Balak, and shot in low light in grimy settings, without light sources that romanticize the moment, “In Darkness” wears its ambiguities well. The director of photography, Jolanta Dylewska, has written that the light is the film’s main protagonist, emphasizing not so lightly that “the ‘Darkness’ [is] a metaphor of the Jewish lot during the Holocaust.” Holland looks into the murk and illustrates another parable that tells us more about that terrible time, while explaining nothing. Her choice is to keep her storytelling reserved even as hellish implications grow in the increasing Babel. “In Darkness” is Poland’s entry for Best Foreign Language Film.  With Robert Wieckiewicz, Benno Fürmann, Agnieszka Grochowska, Maria Schrader, Herbert Knaup. 145m. (Ray Pride)

“In Darkness” opens Friday at Landmark Century and Renaissance.