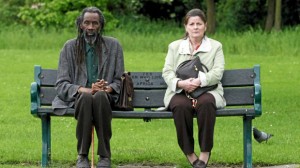 The acting is fierce in Rachid Bouchareb’s “London River,” which strikes two parents from different cultures together in hope of sparks in the aftermath of the July 7, 2005 London terrorist attacks. Mrs. Sommers (Brenda Blethyn) is a Christian widow from the island of Guernsey, and the elderly Ousmane (Sotigui Kouyaté) a Muslim African emigrant, each filled with hope and fear for their missing children. (Fifty-six people were killed and 700 wounded.) Kouyaté and Blethyn provide felt, full performances, rising above a schematic, sometimes tear-jerking script that leans heavily on a variety of political correctness largely unknown in the real world. Still, there are marvelously imagined moments and an earned sense of dramatic completion at the end. Bouchareb’s earlier films include “Days of Glory” and “Outside the Law.” With Roschdy Zem, Sami Bouajila. 87m. (Ray Pride)