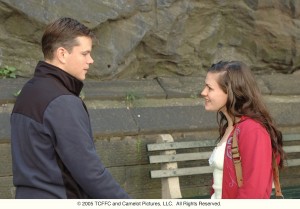 Once was lost, now not quite saved: Kenneth Lonergan’s 150-minute cut of “Margaret,” the eccentric release of which has yet to be explained because of ongoing litigation, returns to Chicago, in 35mm, for a one-week run, because of the support of local critics. Condensing what I wrote at the time of its fugitive release in October: “Margaret” is a frayed-nerves feat of furious articulation. Lisa Cohen (Anna Paquin) is a privileged young woman whose confusions run from mother to father, to sex, to the life of the mind, to elemental guilt. Thematically, “survivor guilt” after 9/11 resounds in Lisa’s witness to, and potential cause of, the death of a woman who’s hit by a city bus. The profusion of life, of life in Manhattan post-9/11, of life that eddies in all directions, is novelistic in ambition, Dickensian in a welter of cracked legalisms. (The film was shot in 2005; note the copyright on the still above.) Paquin brandishes a bravura performance—shrill, feral, emphatic, self-dramatizing, self-cautioning, self-aware, self-immolating—that is like nothing I’ve ever seen. She’s in Lisa’s skin and it’s an uncomfortable place. There’s a repeated fugue as interlude, figures on the city’s sidewalks caught in extreme slow-motion, with Ryszard Lenczewski’s cinematography tending to the shadow-bruised, the ashen. A shaft of light will suddenly pick someone out in the deep distance, their faces illumined in full proper focus for a brief instant. This, too, is Lonergan’s dramatic impulse: how do we all mesh? What’s teeming just beyond all parameters of the frame? The sudden, thrilling, earned ending is an impulsive and perfect and human moment: a little lunge toward tenderness. Plus: the promise of the Thelma Schoonmaker-Martin Scorsese cut, closer to the three hours of material in the screenplay, nestling on a hard drive somewhere out there. 149m. (Ray Pride)

“Margaret” opens Friday for one week at Siskel.