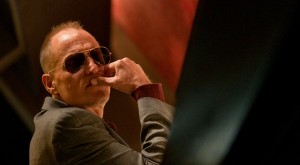 James Ellroy, the self-proclaimed “Big Dog” of American detective fiction, who’s portrayed the history of Los Angeles and, in his latter-day trilogies, the United States, as a sour cesspool that wants only for more fascism to right the ship of state, wrote “Rampart” as an original screenplay, which Oren Moverman, writer-director of “The Messenger” and co-writer of “I’m Not There” and “Jesus’ Son,” was later hired to revise. While it lacks the sprawl of “L.A. Confidential,” even in Moverman’s less authoritarian view, it bears a compact critique of macho bravado that takes a few chunks out of Ellroy World. Set in 1999 L.A., Woody Harrelson plays Dave Brown, a cop in the scandal-plagued Rampart precinct who takes the law into his own hands often and gleefully. Moverman and Harrelson chart a requiem for Brown in the form of a sustained and vitriolic meltdown. “Drive” may have been a neon-noir, gliding through Los Angeles by night, but “Rampart” revels in the dry sandy sun of the city. “Rampart” is the kind of movie that harks back to a perhaps-never-was Hollywood Renaissance of the 1970s: a character study that’s allowed to seethe, simmer and detonate, powered by straightforward cinematography on well-chosen locations and by performances that start at scalding, then rev up. Plus the lingo: oh the talk. Dave Brown is the most articulate Cro-Magnon in an age. He’s no “Bad Lieutenant,” but he’d like you to share his hell, just for a little while. Harrelson, like Moverman, sees little need to explain Brown: his performance is emphatic without necessarily ever becoming empathetic. His brute intensity is a wonder in itself. With Sigourney Weaver, Steve Buscemi, Robin Wright, Ned Beatty, Ben Foster, Ice Cube, Anne Heche, Cynthia Nixon. 105m. (Ray Pride)