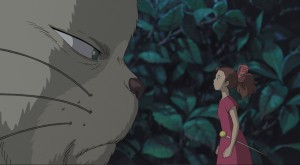 For all the wise artistry in select U.S.-made animated features, typically from Pixar, most screen product targeting our kids and grandkids is too noisy and busy. The saccade-style framings, yabbering dialogue and over-pumped decibels aid and abet ADD. With a gentler velocity and volume, “The Secret World of Arrietty” is a happy alternative from Studio Ghibli, which brought us “Ponyo,” “Spirited Away” and “Howl’s Moving Castle.” Animator Hiromasa Yonebayashi worked on all three of those Japanese tales before making his 2010 directing debut with “Karigurashi no Arrietty” that is now released in an English-voiced version. The supernatural quotient is turned down here, though. The source is a 1952 story by English writer Mary Norton about tiny people known as “Borrowers” who live literally underfoot of people they call “Beans.” The survival of this miniature minority depends on keeping out of sight. Subtext seekers will detect a subaltern trope in the screenplay by Hayao Miyazaki and Keiko Niwa. Borrowers are landless gleaners in a perpetual state of relocation to escape the dire curiosity of the Beans. For fourteen-year-old Arrietty (voiced by Bridgit Mendler from “Alvin and the Chipmunks: The Squeakquel”), the only other Borrowers she has ever seen are her parents, voiced by a taciturn Will Arnett and a frantic Amy Poehler. Her dad identifies Borrowers with dignity, if not a dig at Pixar’s “Toy Story” franchise when his daughter imagines moving into a fancy doll house: “Dolls are toys and we are not toys.” They may be the last of their kind. Arrietty breaks a taboo by letting herself be seen by twelve-year-old Shawn (voiced by David Henrie) and befriending this Bean, who is resting in his aunt’s country cottage prior to heart surgery. The two bond to maintain the title secret from a batty housekeeper (voiced by Carol Burnett) who is out to prove she’s not nuts. She calls exterminators to trap the legendary tiny “thieves” living under the floorboards. Peril for the little characters is less sensational here than in Pixar’s “Ratatouille” and “A Bug’s Life,” which likewise give little viewers role models for living among bigger critters. The calm and uncontrived ending reminds that “The Secret World of Arrietty” is modulated throughout with a tone of mono no aware that is unthinkable in Saturday morning cartoons and sugar cereal TV spots. With voices of Gracle Poletti and Moises Arias, and additional voices by Peter Jason, Frank Marshall and Steve Alpert. 95m. (Bill Stamets)