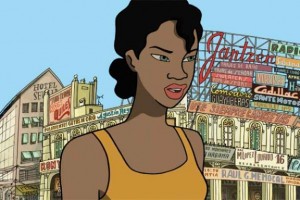 Oscar-winning Spanish director Fernando Trueba turns to animation in the Oscar-nominated “Chico and Rita,” a grown-up entry in hand-drawn style that even boasts sexual interludes and ladies without clothes. While his 1992 “Belle Epoque” evokes pleasant memories of goofy period-set romance, Trueba and co-director Javier Mariscal’s “Chico and Rita,” a musical set in 1948 Cuba, is largely blah. (His Oscar acceptance speech for “Epoque” is memorable: “I would like to believe in God in order to thank him. But I just believe in Billy Wilder… So, thank you, Mr. Wilder.”)There’s little of the wry master in the music-driven “C&R,” but there is at least atmosphere of Batista-era Cuba that would be impossible to produce at almost any budget in live action. (Or to depict honestly in documentary.) The fictional characters mingle with real-life figures, including Thelonious Monk, Marlon Brando, Charlie Parker and Dizzy Gillespie. The score includes music by pianist Bebo Valdés as well as wall-to-wall period sounds. With the voices of Valdés, Limara Meneses, Eman Xor Oña, Mario Guerra, Idania Valdés, Estrella Morente, Freddy Cole, Jimmy Heath, Pedrito Martínez, Michael Phillip Mossman. 96m. (Ray Pride)