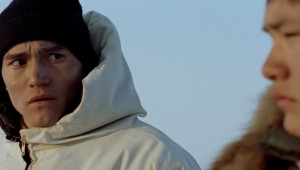 Writer-director Andrew Okpeaha MacLean’s first feature, “On the Ice,” is an effective, lean suspenser set 320 miles north of the Arctic Circle in Barrow, Alaska—his own hometown—with elements that might be more expected on mean streets rather than in icy climes. (Call it “ethno-noir.”)  Based on his award-winning short, “Sikumi,” (2008) and steeped in his own Iñupiaq culture, “On the Ice” follows two seventeen-year-old boys who try to get away with murder after an accident during an early morning seal hunt. Among the other complications to their first simple lie is a tightly knit community, an overabundance of liquor and crystal meth and relentless daylight. Cinematographer Lol Crawley’s widescreen images are splendid; his earlier work includes Lance Hammer’s equally fierce “Ballast.” The Sundance Institute was among the film’s key supporters, and it debuted at the Sundance Film Festival in 2011. With Josiah Patkotak, Frank Qutuq Irelan, Teddy Kyle Smith, Adamina Kerr. 96m. (Ray Pride)

“On the Ice” opens today at Siskel.