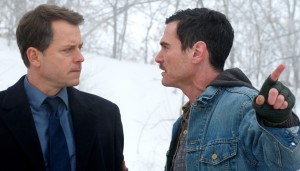 A few days after Sundance 2011, I kicked myself for missing “The Convincer,” a new drama from writer-director Jill Sprecher and her sister and co-writer Karen Sprecher, set in the chilly reaches of their Midwestern home turf. Down the road a piece, I thought, there’s no way Chicago wouldn’t have a chance to see the latest drama, six years in the working, from the makers of the thoughtful, assured films “Clockwatchers” (1997) and “Thirteen Conversations About One Thing” (2001), especially a darkly comic one starring Greg Kinnear, Billy Crudup and Alan Arkin. Whoops! How wrong I was. A few months later, the Sprechers were removed and the film was substantially altered, according to multiple reports. Writing about the film’s producer, Colin Covert wrote in the Minneapolis Star-Tribune, “Some colleagues describe a melodrama of vexed partnerships and broken promises. Jill Sprecher said she is ‘heartbroken and devastated’ by dramatic changes made to her movie after it played well at festivals. Sprecher’s name is still on the film only because she is contractually forbidden to use a pseudonym.” The danger of watching (and reviewing) a movie with such deadly foreknowledge seemed of little significance until a few minutes after putting the DVD into the player. Only with the recent “W.E.” has a movie made a similar negative impression from shot-to-shot, with pacing and rhythm of what appears to be a caper plot hiccuping fretfully from moment to moment. (Mismatched lips in reverse angles of two sides of a conversation, for instance would be distracting on any size screen.) Surely “The Convincer” was a greater sum than the fuckery visited upon what now seems to be only a sub-“Fargo” farrago. I did make my way through its ninety-four-minute entirety. It was not as rewarding as, say, the 149 minutes and forty-nine seconds of Kenneth Lonergan’s “Margaret,” revived last week at Siskel, and in a shorter form than intended, but under the director’s control despite years of legal entanglements not yet settled. Lonergan’s contract protected him to an extent; if Sprecher were a member of the Directors Guild union, she would have been able to remove her name and turn “Thin Ice” into “An Alan Smithee Film,” no questions asked. And in France? Filmmakers have ruined lesser producers with the author’s rights that country’s copyright law affords. Would Sprecher, a most articulate interview subject, recognize this as her own film? And how would she describe the legal morass and existential indignity of a film that contractually bears her signature but not her own work? The three-hour cut of “Margaret” exists and will surely show up sooner than later; it would be sweet to think the same fate awaits “The Convincer.” Around the time of its debut at the 2011 Sundance Film Festival, Sprecher talked to Filmmaker magazine about the vagaries of filmmaking in general. “We set out to tell the story of a character whose detailed plans begin to spiral out of control, leading him to a place he couldn’t have foreseen,” she said. “I’d say that’s a pretty good description of the filmmaking process itself. You’re constantly hit with the unexpected, trying to stay one step ahead, doing the best you can under the circumstances, never fully knowing how everything will turn out. The fact that a movie actually comes together in the end is undoubtedly the biggest surprise of all.” 94m. (Ray Pride)