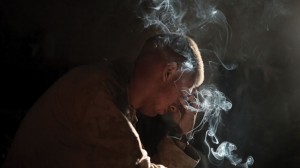 Photojournalist-filmmaker Danfung Dennis’ Oscar-nominated documentary, “Hell And Back Again” is a bracing astonishment, even if it were not opening in a week that’s seen the deaths of three major international correspondents in Syria. (The New York Times’ Anthony Shadid; the Times of London’s Marie Colvin; French photographer Remi Ochlik.) War has consequences, to each and every single participant. It’s not just a battle for hearts and minds. Embedding with a Marine battalion, Dennis follows a single Marine sergeant, from the start of a 2009 tour in Afghanistan to his recovery back home in North Carolina after a sniper “blows half my ass off.” The images are striking in every scene, not only in the exceptionally vivid battle footage, and especially with the strategy of allowing the field of war and a place called home to slip, slip, slip together. The ending is hypnotic, echoing the images that end the “Hurt Locker” but also the narcosis of “Apocalypse Now”: Nathan Harris may casually fall asleep with his pistol in his hand, but what does this recovering solider dream of? Beautiful, measured, wrenching, dramatic, even great, “Hell and Back Again” honors the bravery of both soldiers and photojournalists with its fantastic skills of observation. Dennis has expressed his admiration for the late Tim Hetherington, co-director of “Restrepo,” who was killed in Libya; this is work at the same estimable level. Dennis shot the film on a DSLR, a Canon 5D Mark II camera, and worked as his own soundman. “Hell” won Sundance 2011’s World Cinema Grand Jury Prize in Documentary, and the World Cinema Cinematography Award for Documentary Filmmaking. 88m. (Ray Pride)

“Hell and Back Again” opens today at Facets.