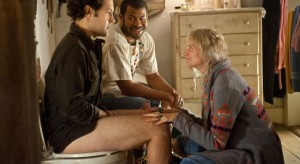 RECOMMENDED
One fine morning in New York City, Linda (Jennifer Aniston) pitches HBO on her documentary on penguins with testicular cancer, while her husband George (Paul Rudd, “Our Idiot Brother,” “Role Models”) sees his white-collar workplace aswarm with FBI agents and finds out he’s fired. The couple’s newly acquired “micro-loft” is instantly unaffordable and they decamp the West Village for an alternate latitude. Producer Judd Apatow extends his brand in the smartly funny “Wanderlust,” directed by David Wain (“Role Models,” “Wet Hot American Summer”) and co-scripted by Ken Marino and David Wain (among the writers credited on “Role Models.”) George’s obnoxious brother in Atlanta offers a roof and a data-entry job. On the drive south, George and Linda overnight at a bed & breakfast run by a free-love vegan commune named Elysium. The couple soon flees George’s sibling issues in the gated enclave of Whitehaven, and backtracks to Elysium. There they test their monogamy and ideas of the good life. A few trippy sips of ayahuasca tea cue a hallucinatory interlude. Another obligatory trope, per Apatow, is the jumbo prosthetic penis affixed to a nudist vintner and novelist. Its dangling near George’s face, along with a scene of elderly nudists in a panic, prompts an R-rating for a raunch romp that’s less immature than most. One running gag is the out-of-date technology mentioned at Elysium, founded in 1971, whenever someone puts down the modern life of Zenith television sets, laser discs and floppy disks. Every supporting character is detailed with verve, even a suburban brat with just one line and a mere blink of screen time. The writing at times smacks of undergrad lit humor, with gags about “literal” versus “figurative” metaphors, college majors and fecal lucre. Plot bits about a casino developer and a misplaced deed may be penned with no elan, but Atlanta-haters will find allies. With Justin Theroux, Malin Akerman, Kathryn Hahn, Jordan Peele, Lauren Ambrose, Ken Marino, Joe Lo Truglio, Kerri Kenney-Silver, Alan Alda, Linda Lavin. 98m. (Bill Stamets)
“Wanderlust” opens today.
Ray Pride