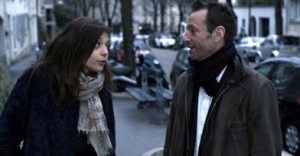 Dark and tragic, “After Fall, Winter” is an internalized take on Shakespeare’s “Romeo & Juliet.” “I wanted to portray two individuals who are desperately seeking intimacy, but have psychological roadblocks,” says director and screenwriter Eric Schaeffer, noting that he wanted to make a story that people could identify with.

As with many of his films, Schaeffer himself plays the male lead, Michael, a failing writer who moves to Paris in the hope of starting anew. When he meets Sophie (Lizzie Brocheré), a hospice nurse for the terminally ill, the two become involved in a relationship rife with secrets, emotional distance and an overwhelming desire to connect.

While the film’s story stands alone, it is meant to be the second in a quartet and revolves around the life of the lead character of Schaeffer’s earlier film “Fall” (1997), in which Michael is a cab driver in New York with whom a married supermodel has an affair. The idea of making four films focused on the character had not begun to take hold in Schaeffer’s mind until just a few years ago. “I had decided to make a singular film, but over the years, there has been such tremendous love for ‘Fall’ that I started thinking,” says Schaeffer, “How amazing would it be for audiences to get a view of [Michael] fifteen years later?”

This drew him to the idea of creating a quartet, each symbolically following a season. “The four stories may not progress in terms of age,” he says, adding, “I’m open in terms of where I’ll be in fifteen years.” He notes that he may delve into a prequel set during Michael’s teens, a scenario in which the lead has died and passed on to the afterlife, or even a prequel dealing with his parents meeting.

“After Fall, Winter” is set during Michael’s mid-life crisis and deals with the ways in which one’s self can be the very thing that prevents them from finding redemption and love. “They fall in love and want to get closer, but they are held back by emotional issues,” says Schaeffer, “I wanted to tell a very sober, a raw, and ultimately at times bleak, story.” (Kristen Micek)

“After Fall, Winter” screens at Facets on February 27 at 7pm. A reception will be held prior to the screening at 6pm and Eric Schaeffer will be present for a Q&A after the screening with sommelier and host of “Check, Please!” Alpana Singh.