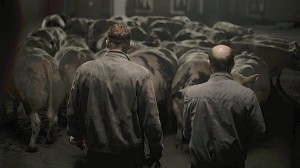 “Sometimes in a man’s life stuff happens that makes everyone go quiet. So quiet that no one even dares talk about it. Not to anyone, not even to themselves. Not in their head and not out loud. Not a fucking word.” Auspicious words to start any story… The Bovine Hormone mafia is raising a ruckus in Belgium, and for Jacky, a raging thirty-year-old bull farmer, it’s an understatement to say that it’s balls-to-the-wall all the way. “Bullhead” (Rundskop), Belgium’s entrant for the Best Foreign Language Oscar and one of the final five competitors, is one grim nightmare. The key to the protagonist’s dilemma is an extended flashback to his childhood, where something… bad… happens. The sudden shocks of violence that alienated viewers of 2010 Oscar nominee “Dogtooth” are mere pinpricks. With delicious pretension, the original press notes for “Bullhead” quote philosopher Walter Benjamin, “Fate shows itself, therefore, in the view of life, as condemned, as having essentially first been condemned and then become guilty.” Or as the script puts it more plainly, “No matter what you do or think, one thing is for sure: You’re always fucked. Now, tomorrow, next week or next year, until the end of time, fucked.” Michaël R. Roskam’s dark drama, richly photographed and as metaphorically bulked up as its steroid-compulsive protagonist, is a sorrowful testosterone opera of American gangster tropes transposed to the low skies of Flanders. As Jacky, Matthias Schoenaerts’ intensity extends to his massed musculature, as gainful of weight as a Christian Bale role is disdainful. The stunningly painterly chiaroscuro of the widescreen imagery, from brute landscape to brooding close-ups, is courtesy of cinematographer Nicolas Karakatsanis. With Jeroen Perceval, Jeanne Dandoy, Barbara Sarafian, Tibo Vandenborre, Frank Lammers, Sam Louwyck. 124m. (Ray Pride)