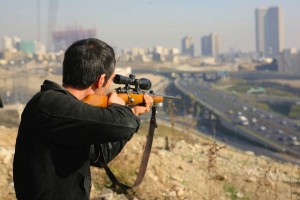 From its bravura title sequence to its bracing puzzle-box of an ending, Rafi Pitts’ spare, stern, beautiful “The Hunter” (Shekarchi, 2010) is a steely, fated Iranian noir. Heavily influenced by American filmmaking both of the classic era and of the 1970s Hollywood Renaissance, Pitts’ tightening vise of tragedy makes for a vital, potent mix, as if Monte Hellman remade “Targets” in Tehran with a chilly dash of Bresson’s “L’Argent.” But while it wears its influences, this laconic thriller is gorgeous cinephilic transformation, and its sound design is as expressive as its spiraling drama and sterling composition and pacing. Kafka would be impressed, tittering quietly at the paranoiac downfall of Ali, Pitts’ brimming-eyed hero (played by the director himself), recently released from prison and hoping to change his life for himself, his wife and his daughter. The teeming Iranian metropolis looks for all the world like an extension of Los Angeles, or any overpopulated city across the globe. But there are fascinating specifics throughout. Against a backdrop of protests like the country’s ill-fated Green Revolution, largely expressed on the soundtrack, “The Hunter” creates a detailed world that will only crush those who trip once, unexpectedly, unaccountably, falling to some moral pitfall. Green, that color that once expressed hope, is ever-present, but never flagged: ironies redound. From calm and resignation comes madness and violence. Unaccountable forces offer no respite. Man lashes out. Pitts’ filmmaking is unyielding. 92m. (Ray Pride)

“The Hunter” opens Friday at Facets. The trailer below reveals many plot points but amply demonstrates the power and beauty of the film.