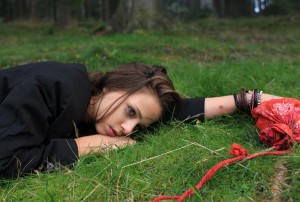 "Beats Being Dead" from "Dreileben"

As impressive, but slightly confusing are the four different formats the movies are being shown in: It’s a buffet of selections from among the choices theaters still have, at least until next year.  There are thirty-three being shown on projected celluloid in thirty-five millimeter; nineteen in HDCAM video (a format often mandated by film festivals), seven in DigiBeta and seven in the DCP format, which is the heavily protected format that the U.S. film industry has chosen to replace 35mm as an exhibition medium. The president of the National Association of Theatre Owners recently said, “Our guess is by the end of 2013 there won’t be any film distributed anymore.” Some observers have written that small European countries, like Lithuania and Hungary will continue to shoot and exhibit on 35mm a bit longer because of the immense cost of digital projectors to replace century-proven, workhorse 35mm ones. With the high-quality projection the Film Center is known for, everything will look good; but the mix of formats is an eclectic one that captures the state of an artistic medium in transition, even upheaval.

The EU series, starting only a few days after the first time a cinematographer won an Oscar for a 3D movie, demonstrates an impressive range of styles and concerns as well. Of the ones I’ve been able to preview, the strangest may be “Alps,” a cryptic parable about mourning from Yorgos Lanthimos, director of Greece’s 2011 Oscar entrant “Dogtooth,” which only reveals its meaning in its last three shots, and does so with a force that more traditional narratives would never achieve. Mind games are played atop mind games in a succession of startling and sometimes unsettling setpieces.

The most ambitious may be the German trilogy, “Dreileben,” a refracted, Kieslowski-like project in which three different directors (each, incidentally, born in a different decade), tell stories that have a serial killer and one central incident in common. It’s a compelling “effort to graft modernist narrative strategies onto a genre-driven plot premise,” in the words of film scholar emeritus David Bordwell. The three films—Christian Petzold’s Hitchcockian “Beats Being Dead,” Dominik Graf’s “Don’t Follow Me Around” and Cristoph Hochhäusler’s fairytale-ish “One Minute of Darkness”—work with different visual styles (Petzold’s hyperprecise; Graf’s cluttered and eccentric) and narrative strategies, yet all evoke a sense of a lived-in world in a small German town that’s rare in more impatient movies. 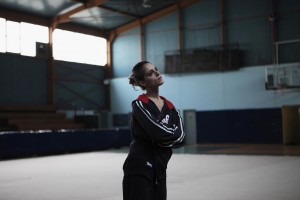 In the opening week, from the Czech Republic and Slovakia, Zuzana Liová’s “The House” grafts the social realist approach of Ken Loach to the story of a teenage girl rebelling against her controlling father: Judit Bárdos’ turn as the young woman has a hard, fierce center. It’s filmmaking of quiet assurance, which is more than you can say for Latvia’s “Three To Dance,” a prettily photographed but inert World War II romance. From Denmark, the documentary “Putin’s Kiss” conveys a scarier form of romance, following four years in the life of Masha Drokova, a Russian teenager who became notorious for giving the Russian strongman a public kiss when she was only sixteen. Her life curdles over the course of Lise Birk Pedersen’s fascinating portrait of crushing disillusionment and political awakening in a country that superficially considers itself a democracy.

From the Czech Republic, “Innocence,” by reliable storyteller Jan Hrebejk (“Kawasaki’s Rose,” “Beauty In Trouble”) presents a respected doctor whose career and life are shattered with an investigation after accusations of molestation by a teenage patient. “Innocence” plays as a neat puzzle, and comes as an interesting surprise from a director better known for his comic instincts.

Of the fifteen or so movies I’ve previewed from the festival so far, surprise is the one constant, and more surprises will be reviewed as March goes on.

The festival opens March 2 and continues through the end of the month. See the Siskel Film Center’s site for a complete listing.