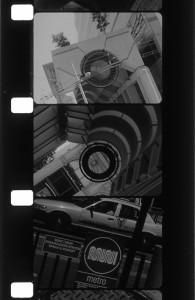 In five silent “sketch” films, introduced by San Francisco morning’s newspaper and its date, Japanese filmmaker Tomonari Nishikawa assembles single-frame constructions of cityscapes, of walks down streets, which take on their own quietly spastic frenzy even while evoking other things, such as the many-eyed camera of a Google Street View street car gone into a drunken, propulsive swoon. Lines, circles, numbers, windows, doorways, oval windows and buildings that persist only as angled precipice. Fragmentary glimpses are patterned to create an illusion of persistence of vision, but they are shards upon shards. Weirdly, the effect is both limpid and soothing. In the Thai-shot “Lumphini 2552,” in black-and-white 35mm, Nishikawa assembles vegetation in a seductive series of patterns that would be as welcome on gallery walls as on designer fabrics, accompanied by a soundtrack at once like the hiss of an optical soundtrack, breeze on an improperly shielded microphone, or the gossip of the momentarily troubled flora. In the mini-DV “Clear Blue Sky,” ordinary traffic sounds of a warm day rise up against images slightly out-of-focus, or reflected across metal, like a funhouse mirror fashioned from macular degeneration. Nishikawa will show eight of his own films and four by other filmmakers. 80m. 35mm, Super 8, 8mm, 16mm, Mini-DV. (Ray Pride)

Tomonari Nishikawa will appear with his program Thursday March 8 at Siskel.