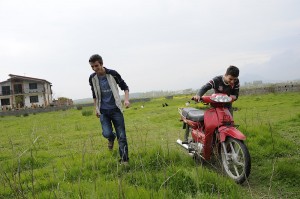 “How Albanian is it?” isn’t a question the average American filmmaker expects. Joshua Marston, whose well-regarded debut feature “Maria Full of Grace” (2004) is a Spanish-language film set in Colombia, steeped himself once more in another culture for his second film. In “Forgiveness of Blood,” two teenagers coming of age in Albania are thrust into a variation of centuries-old traditions of revenge killings and blood feud. In the twenty-first century, just as it was in the fifteenth, when certain crimes are committed, the extended family is shunned, put behind doors, forbidden from the larger world. (The Kanun of Lek Dukagjin is the name of the code.) While this Albania is a modern world with cell phones, where its male protagonist hopes to open his own internet café, older rules still rest in the rugged hills. While Marston worked with local non-professional actors and Andamion Murataj, an Albanian co-writer, its submission as that country’s Best Foreign Language Film to the Oscars was quickly shot down after protests by the small, but apparently vociferous Albanian film community. Marston writes, “Blood feuds are generally presented as inexorable, archaic traditions practiced by violent, backward people. My intention in the film is to turn this view on its head, to humanize the portrayal by telling an everyday story of one particular family through the points of view of sympathetic, ordinary individuals.” How do these two young people fit into a widening generation gap, in a time of globalization and its discontents? The eddying of the effects of violence from inside the culture outward, and into a larger world, are quietly conveyed by Marston’s telling. Neither Albanian nor American, “Forgiveness of Blood” reaches for the universal. The lush but brooding cinematography is by son-of-Sheffield Rob Hardy (“Boy A,” “Red Riding: 1974”). With Tristan Halilaj, Sindi Laçej, Refet Abazi, Çun Lajçi, Ilire Vinca Çelaj. 109m. (Ray Pride)

“The Forgiveness of Blood” opens Friday, March 9 at Landmark Century.