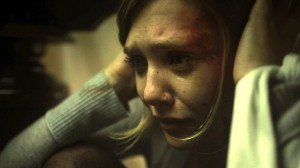 “Dad?… dad?… daddy?… dad?… daddy?… daddy?” asks fearful Sarah (Elizabeth Olsen, “Martha Marcy May Marlene”) after she hears a big boom, and then goes from one dark room to another and then another, looking for him (Adam Trese). No one has used the family’s old lake house for years. The electricity is off. All the windows are boarded up because vandals broke the glass. Most of the lighting in “Silent House” looks handheld by the actors. Cinematographer and camera operator Igor Martinovic nimbly frames and focus-shifts long takes with close-ups of Sarah, quaking and convulsing in mute terror at whatever is making those noises, bloodying her father and dragging his body around. Chris Kentis and Laura Lau (“Open Water”) co-direct Lau’s script “based on” the 2010 Uruguayan film “La Casa Muda,” which was that country’s Oscar submission for Best Foreign Language film this year, as well as being featured in Zagreb’s One Take Film Festival. (The trailer’s formulaic editing wrecks any impact of the “real fear in real time” conceit.) Not only are cuts not obvious, the scare tactics are spare. There are no yellowed newspaper clippings of an unspeakable crime in the past, no obsessive scrawlings, no medieval etchings of the monstrous, no cryptic outbursts in archaic languages, no possessed dolls or pets, no grizzled caretaker, no searing headaches, nor anyone in a casket or straitjacket. What must come at the end, of course, is the explicating twist. “It’s an extremely serious worldwide problem,” allows Lau in the press notes. It spoils nothing to cite a few phrases from a book she said she read while researching her late reveal: “object-images,” “primitive agonies,” Jungian “syzygy”: say no more. Their “re-imagining” of “La Casa Muda,” claim the filmmakers, “deconstructs our perception of how one makes a taut, unnerving thriller in real time.” That presumes audiences arrive with a “perception” of how any thriller is ever made “in real time.” “Silent House” deconstructs nothing whatsoever. It’s just a finely-engineered horror film using the trope of a creaky house in the country with a young woman inside enduring abject terror. Until she swings that sledgehammer and gets out of there. With Eric Sheffer Stevens, Julia Taylor Ross and Haley Murphy. 88m. (Bill Stamets)
“Silent House” opens today.
Ray Pride