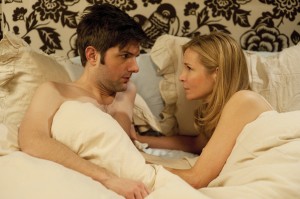 One of the grown-up aspects of Jennifer Westfeldt’s debut as a film director—aside from not being “‘Friends,’ With Kids”—is how she works both blue and red. Her roundelay of couples at the cusp, then hoist upon the cusp of childbearing, make vulgar remarks, drop biting insults and many garish swears, and also casually drink through bottle after bottle of red wine and a couple of copiously displayed brands of bottle beer, one indicating “crass,” the other, “class.” (Talking with her recently, she smiled sweetly and said, “That’s just how my friends talk.”) The how-do-we-make-a-romantic-comedy-in-this-decade gimmick is that two friends since college (Westfeldt, Adam Scott) know each other’s lives inside out but have never become romantic. While they continue to play, their friends—couples Kristen Wiig and Jon Hamm; Chris O’Dowd and Maya Rudolph—have kids. But! What if they shared a kid? But not their lives? Cruel behavior and often crackling banter follow. Westfeldt’s roots as an actor, and some of the nicely cadenced comic lines sail because of ideal intonations. Introducing herself, Megan Fox’s younger-woman character says of her name, Mary Jane, “I’m named after shoes,” and it’s self-effacing, eh, kind of, but with the right note of flirtatious disdain toward the other character. There’s also a keen distinction made between the Manhattan of twentysomethings and the Brooklyn of thirtysomething childbearers, which reinforces some of the more at-wit’s-end banter. I wouldn’t put “Friends with Kids” in the same class as Nicole Holofcener’s exquisite take on modern New Yorkers, “Please Give” (2010), but for a third produced script and first feature outing, it’s got its own voice. Mike Nichols signed on as an executive producer after seeing a read-through at a theater company Westfeldt’s long worked with, and there are a gratifying number of barbs you’d hope would come from work signed by that eighty-year-old master of the curdled urbane, if he were still making movies. There’s also a sweet parallel between the last scene of “Friends” and the last scene of Jules Feiffer’s “Carnal Knowledge,” directed in 1971 by Nichols. After much reluctance, a couple falls together onto a bed and a line is uttered: acidic, resigned in “Carnal”; bawdy, even profane, and best-friends-forever filthy in “Friends.” “Carnal Friends”: that’s more to the truth of the story, where the focus, gratefully, stays on the adults and their educated but ill-prepared haplessness, instead of glamming up the babykisses. 100m. (Ray Pride)

“Friends With Kids” is now playing at Landmark Century.