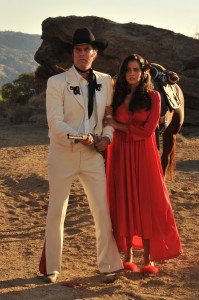 RECOMMENDED
To get “Casa de mi Padre” you need not know your telenova stars or much at all about Mexican moviedom. Shot in “MexicoScope” and subtitled in English, this Spanish-language parody of a global genre is of a piece with past “Saturday Night Live” bits. Their creators, writer Andrew Steele and director Matt Piedmont, reunite here for a feature-length affair that is far more than a mere skit running too long. The genre’s clichés are so copious, there is little risk of running out. Sight gags include continuity gaffes and gaffers reflected in extreme close-up on the lens of sunglasses. Will Ferrell stars as dim Armando, the good-hearted older brother of flashy Raul (Diego Luna) who returns to the family ranch with his super-hot fiancee Sonia (Genesis Rodriguez). Drug dealers and DEA agents supply the backdrop for a classic family drama of romance and redemption. Among the credited producers is SNL alum and producer-writer-director hyphenate Adam McKay, who earlier fashioned Ferrell in “Step Brothers,” “Talladega Nights: The Ballad of Ricky Bobby” and “Anchorman: The Legend of Ron Burgundy.” From the distributor of last year’s “Salvando al Soldado Pérez” (“Saving Private Perez”). Mostly set in Iraq, that Mexican narco-family comedy lacked the meta-yuks that are key to the comic success of “Casa de mi Padre.” With Gael García Bernal, Pedro Armendáriz Jr., Nick Offerman, Efren Ramirez, Adrian Martinez. 84m. (Bill Stamets)
“Casa de mi Padre” opens in limited release Friday.
Ray Pride