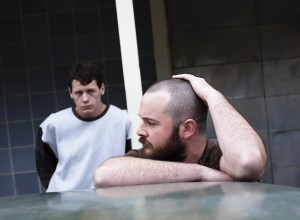 Killing is terrible and visceral and that horrible truth is often overlooked by the movies: Justin Kurzel’s “The Snowtown Murders,” adapted by Shaun Grant from two nonfiction books about the 1999 case of John Bunting, Australia’s worst serial killer, is a chilly, chilling reminder. (The line “It’s the Australian way, isn’t it?” is another form of bludgeoning.) Kurzel and an array of strong performers (including the superb Daniel Henshall as Bunting and Lucas Pittaway as a disaffected teen who becomes a ready accomplice) do their damndest, or most damned, to convey the extremities of the dozen murders that took place over the course of the 1990s in the suburbs of Adelaide. The actors are aided by bleak production and dismal costume design—which one almost hopes is from condescension rather than documentary impulse—and reliance more on squalid surroundings and threatening atmosphere than an ongoing revelation of the depths of brutality these “pervs” are capable of. While gruesome violence is depicted, the actual crimes were apparently much… much… worse. The ugliest implication is about the capacity for wrongdoing in dysfunctional families that welcome a conniving, corrupt stranger of uncertain charms into their midst. While “The Snowtown Murders” (produced as, simply, “Snowtown”) will appall many, Henshall’s performance as the shambolic, charismatic drifter who settles into this unwary family and community, is showy but substantial. He’s the stain you can’t wash away. With Louise Harris, Anthony Groves, David Walker, Aaron Viergever. 120m. (Ray Pride)