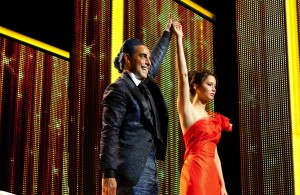 Call it “Running Child.” Early reviewers of Gary Ross’ adaptation of the young-adult bestseller “The Hunger Games” were largely hung up on its literary predecessors for a story of humans hunting humans to the death, reality television, and human sacrifices being made to satisfy the larger society, which may include “The Most Dangerous Game,” Shirley Jackson’s “The Lottery,” William Golding’s “Lord of the Flies,” and a couple of Stephen King’s Richard Bachman Novels, “The Running Man” and, especially, “The Long Walk.” Then, there’s also “Gladiator” and “America’s Next Top Model.” Plus, the source that author Suzanne Collins cites, the Greek legend of Theseus and the Minotaur. That’s the best one, particularly if you like this popular book called… “The Hunger Games.” But what exactly is on over 10,000 screens this weekend?

Ross, director of “Pleasantville” and “Seabiscuit,” isn’t working as a visionary, or even with subversive virtuosity. Many scenes, especially battles, are choppy, but efficient. Collaborating with editors Stephen Mirrione (“Contagion,” “The Ides of March,” “Biutiful”) and Juliette Welfling (“The Diving Bell and the Butterfly,” “Un prophete”) Ross does, however, keep the near-150 minutes of narrative bounding forward at a commendable gait. A war was fought against the powerful almost a hundred years ago, and for seventy-four years, “The Hunger Games” have pitted a boy and a girl from each of twelve districts (not even graced with a name) of Panem to fight in a wooded arena to the death. (“Panem” is a play on the Latin for “Bread and Circuses.”) Example is made; blood is paid, for almost a century on, as conscription for show in unjust, unmatched battles continues to keep the populace fearful, children sent to ceremonial battle to slaughter other children.

What comes through clearly, despite PG-13 reticence in depicting the child-on-child violence, is the analogy to what could face much of the teenage audience watching the movie in its sure-to-be record-breaking opening weekend: increasing unemployment, the destruction of the middle class, children sent to wars to kill other children. (The metaphor obtains, even if imagery of our never-ending wars in multiple countries is not televised.) On screen, the metaphor for the triumphalism of endless war resounds, in the form of science fiction that speaks in subdued, telling tones of our own specific moment.

The games are played in a woodlands-like arena outside the Capitol, itself a decadent futuristic enclave resembling Shangri-La designed by Albert Speer with a dash of Marienbad. But the sacrifices, or “Tributes,” come from rural areas where a cowed populace harvests minerals and crops. The Appalachian-styled District 12 that Katniss Everdeen (the fine, formidable Jennifer Lawrence) hails from is rich with heartbreaking landscapes of rolling greenery and decades of impoverishment, but also of Lawrence’s freckled features. (Call it “Hunger’s Bone.”) The look is a little Dorothea Lange, a little Shelby Lee Adams, but perhaps could have used a little Ralph Eugene Meatyard, as the haunted work of Southern photographers goes. The imagery is picturesque rather than truly pained. But a movie must shorthand, telegraph, imply, as much as fully explicate. As for imagery that breaks through the too-close shooting style, a hallucination of a coalmine explosion bursting to the surface throughout a small town is a fine shock, as is a “Zabriskie Point”-style interlude of a pyramid of provisions pinwheeling explosively skyward. Much of cinematographer Tom Stern’s work, however, traffics in give-and-toss handheld work, unlike his work with Clint Eastwood’s steady hand in movies like “Million Dollar Baby,” “Gran Torino” and “J. Edgar.”

Once in the Capitol, the decadent couture of the richest of the rich could have stepped from any common catwalk, runway or photo spread in W magazine. The interiors are simple chintz, as if from an especially misguided issue of *wallpaper magazine from the turn of some century. Stanley Tucci, flashing false gnashers as a glib reality television host, is a keen caricature of a timeless toady to the powerful, especially the powerful that have cordoned themselves from the populace at large. What do the puppeteers of the game urge the victims-to-be to wish for? Only to “bring pride to my District.”  The movie becomes a grim, gleaming machine, largely humorless and better for that, a dystopian “Platoon” for contemporary teens. As battle is done, fear and suffering seem near orgasmic across Lawrence’s features in often-extreme close-up. As for any lasting influence? If young women are inspired to take up Katniss’ skills, including dead-accurate archery… great work, wholly aside from what is good or unrealized about the movie, has been done. While Katniss is never tempted to kill without justification in the fever and fervor of the moment, leaving the characters’ moral ledger pristine, she makes for a laudable warrior figure. 142m. (Ray Pride)