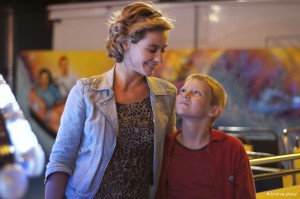 There’s nothing overtly religious about most of the films by Belgian brothers Luc and Jean-Pierre Dardenne, but there is a spiritual character that often works in mysterious, elusive ways. “The Kid With A Bike” (Le gamin au vélo) is about a troubled twelve-year-old hard case (Thomas Doret), nicknamed “Pitbull” for good reason, who learns about life through a series of unexpected encounters, especially with a local hairdresser, played by the luminous Cécile de France. The duo is an unlikely match, but both performers are alive in thrilling fashion. Reviewers who called the film “Dickensian” after its Grand Jury Prize win at Cannes 2011 aren’t far off the mark: there’s a teeming, well-peopled generosity in how the Dardennes view even the most minor characters here. Vivid and beautiful, “The Kid With A Bike” moves in wondrous ways. With Jérémie Renier (“La promesse”) as the boy’s father. 87m. (Ray Pride)

“The Kid With A Bike” is now playing at the Music Box.